Black execs becoming extinct and Gordhan is not the problem 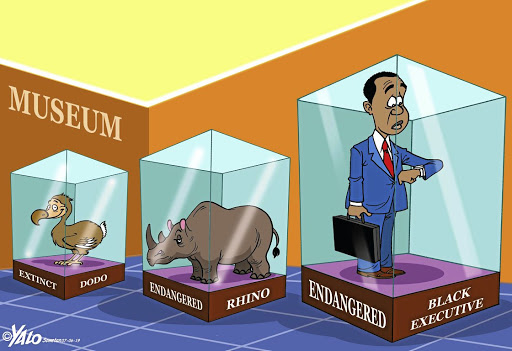 It is no exaggeration to say black executives are becoming such an endangered species that we might find ourselves on the streets with placards which read: "Save the Black CEO!"

News of the resignation of highly regarded executive Vuyani Jarana as the chief executive officer at the troubled South African Airways - just a few days after it was announced that Eskom's Phakamani Hadebe had also thrown in the towel - have sparked genuine concerns about the plight of black senior managers.

Most of the debate has centred around state-owned enterprises which the Black Management Forum described as "a slaughter house" for black executives.

"State-owned companies have become a slaughterhouse for skilled black leaders and executives whose reputations get tarnished because of factors that are beyond their control," said BMF president Andile Nomlala earlier this week.

"It has come to our attention that other black leaders and executives are on the verge of also submitting their resignation letters due to intolerable levels of political interference and the failure of the government to fully support them and address the capital structures and funding models of their struggling SOCs," he said.

The Black Management Forum has urged black executives not to apply for senior positions at state-owned companies.
Business
3 years ago

The BMF has now gone as far as to urge black executives not to apply for senior positions at parastatals.

Predictably, the Jarana and Hadebe resignations have played right into the hands of public enterprises minister Pravin Gordhan's political enemies.

Still disappointed that President Cyril Ramaphosa retained Gordhan as a minister when he announced his new cabinet last week, these detractors wasted no time in accusing the minister of presiding over the "onslaught" on black executives.

But if black CEOs are becoming extinct, specifically in the public sector, surely the problem is much bigger than Gordhan.

For starters the exodus of black executives, many of them under a dark cloud, in parastatals started happening long before Gordhan became a minister.

By the time Gordhan was appointed public enterprises minister, Eskom had already gone through 12 CEOs and acting CEOs in a space of 10 years.

At a special round-table meeting convened by Ramaphosa at the Union Buildings on Wednesday afternoon, some of the CEOs of parastatals pointed out to the president that their problems were largely structural.

They asked for "a better definition of their mandates" and roles, so that conflict with their parastatal's boards as well as their shareholder ministries can be avoided.

Whether the public enterprises minister is Gordhan or someone else, so long as there is no clear definition of the roles, the CEOs will always find themselves in conflict with the boards and their political principals.

Whispers in the corridors of power at Eskom, for instance, suggest that Hadebe interference by non- executive board members, rather than the minister, led to his resignation.

But it has not always been the undue interference by politicians and nonexecutive board members which led to the departure of black CEOs from parastatals.

A long list of highly skilled executives whose futures looked bright were felled by corruption or their inability to resist the agents of state capture.

To complain that parastatals destroy careers without acknowledging that some of the trouble that befell black executives is of their own doing is to be dishonest.

It is therefore imperative that executives appointed to head parastatals are people of high moral standing and that the president and his government do all in their power to give them the support they need.

For if SOEs and government departments are going to turn into hostile and unhealthy working environments for black executives, where else are they going to turn?

The private corporate sector isn't much of an option for many senior managers. As much as the BMF's call for a boycott of SOE posts is understandable given what some of the black executives are going through at parastatals, the reality is that there aren't too many opportunities for senior black managers at the top of private sector companies.

A 2015 research into the subject showed a decline in the number of black SA CEOs heading the country's top 40 private sector companies.

The 2015 Jack Hammer Executive Report showed that the number of this category of CEOs had declined from 15% in 2012 to around 10% three years later.

An analyst at the time warned that the study also suggested that "executive transformation is set to remain peripheral for the next five to 10 years".

In other words, the most realistic opportunity for a black South African with an ambition of running a large organisation is in the public sector.

If we are to avoid having to carry "Save the Black CEO" placards, the first step is to transform SOEs from a "slaughter house" into an environment where the excellence of black executives can be allowed to thrive.