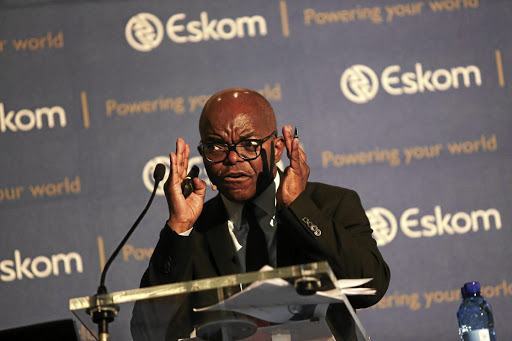 Outgoing Eskom CEO Phakamani Hadebe allegedly collapsed three times while on duty due to the pressures of work. The writer says men need to declare that they need help if need be./Alaister Russell

My heart goes out to Phakamani Hadebe, the outgoing CEO of the power utility Eskom. The sad reality is that he was handed a poisoned chalice, so to speak.

Hadebe had this to say about his job at Eskom, "It's no secret that this role comes with unimaginable demands, which have unfortunately had a negative impact on my health.

"In the best interest of Eskom and my family, I have therefore decided to step down."

It is alleged that Hadebe collapsed on three different occasions. The company has denied this.

The danger that comes with capitalism is that it puts profit before the wellness of people. It is a cruel and inhumane system which is premised on the principle "it's a dog eats dog world".

The sad part about capitalism is that the emotional wellness of those that produce its profits is hardly ever taken into consideration. This is especially true if the incumbent is male and black.

What is the relevance of his maleness and race, you may ask? Our societal script dictates that if you are a man in a powerful position, you are not meant to show "weakness" or vulnerability.

You must face things head on, even if your health and wellness is at stake. It is no wonder that Hadebe may have collapsed on more than two occasions.

Eskom chief executive Phakamani Hadebe has resigned from the company. The state owned entity announced on Friday that Hadebe will be stepping down ...
News
2 years ago

As for us black people, from time immemorial, we have never been taught to seek help from professionals such therapists and psychologists; it is considered Eurocentric.

I know you may be accusing me of making a gross generalisation without any scientific evidence, but the truth of the matter is that we have these lived experiences where men will not voluntarily seek professional help.

To add to the toxic mix, there are also issues relating to our culture, which would paint you as being less of a man - if you were to seek help. You would be painted less of a man, because you are seen to be incapable of handling life's issues on your own; when, in fact, there is nothing wrong in seeking help.

Do not get me wrong, I am not saying these are the causes of Hadebe's departure from Eskom. His case did, however, make me think of the cost of being a "powerful" man at the helm of a multi-billion company.

Imagine how different our corporate culture would be if men and women in such powerful and demanding positions were openly allowed to say "I am not coping, I need help". Surely the picture would be different.

There is an urgent need for us to support men and women who go into these environments that remain hostile to black people.

If we do not, we run the risk of undoing the gains we have made post 1994. It would be naive to believe that there is no need for emotional support at such high levels of leadership roles.

This thinking has to change and the sooner we realise the urgency, the better. Otherwise the black talent we pride ourselves in, would be an endangered species.

I hope that all of us would relook at how we raise the boy child in particular. Raising them believing that they are the alpha and omega is, in fact, a disservice to their wellbeing. It is important for us to inculcate the boy child at a very young age that it is okay to seek help, it is okay to be vulnerable. We need to teach them that within their survival tool kit, to seek help is not to err.

We need support, love and to be cared for, if we are to be fully fledged human beings.

This toxic socialisation has to come to an end. We need to raise a different generation of boys and girls - boys in particular because it is through them that this toxicity is more pronounced.

We can no longer fold our arms believing that things will work themselves on their own. I hope the corporate world does some naval-gazing and a deep societal introspection as to why do we continue to lose black men of high calibre and talent in the corporate world. It is time that the corporate world recognises that profit and the bottom-line is not all that matters.

The investment in the holistic wellbeing of their human capital is of utmost importance, because without human capital, there is no bottom-line or profit. Emotional wellness is one thing that this sector should pay close attention to.