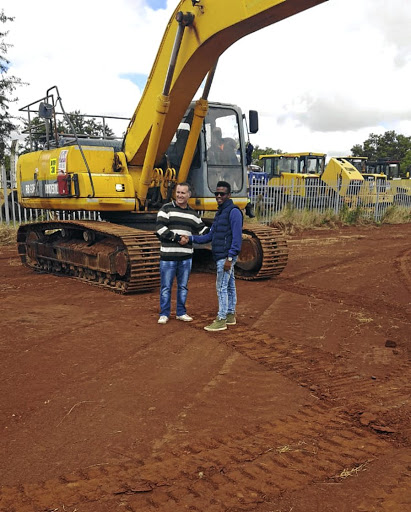 Sergio Guimaraes stands by the excavator he intended to lease to Junior Marogoa. /Supplied

A 24-year-old budding entrepreneur is crying foul after paying almost R100,000 for leasing an excavator which he has not taken delivery of since March.

Junior Marogoa intended to use the machine for excavating trenches after he had secured a sub-contract with a local builder to install water pipes.

Marogoa, of Dendor Location in Limpopo, thought he had broken through the building industry, and sacrificed to raise R99,134 to pay Sergio Guimaraes of Procube International Mining, in Pretoria, for an excavator to use for digging piping trenches.

He said he was referred by a friend who works for Guimaraes and thought he would be treated as a valued client since he was introduced to them by their employee.

Marogoa said upon viewing he spotted a Hitachi 330 and Rondebult RB936 which were in good condition, according to the mechanic he brought along for a second opinion.

"I was impressed by their terms and conditions and I proposed to rent one excavator as soon as they had fixed a few defects which needed to be repaired on it," he said.

However, a few days later, Marogoa said Guimaraes called and advised him to pay R99,134 for monthly rental and also to secure the powerful machine as there was another prospective leasee who wanted the same excavator he had chosen.

This put him under pressure to use money from his coal business, thinking he would recoup the money within a month as he was offered a contract of R300,000 per month for installing water pipes, he said.

"Now I have missed out on a R3.6m deal, and that was going to be enough to buy my own equipment," he said.

Marogoa said since Guimaraes claimed that he was in a business of selling and leasing out excavators, he never suspected he would have to beg him to deliver what he had paid for in full and without hassle.

However, after he made the payment all he got were excuses from Guimaraes despite an undertaking to deliver the excavator before the Easter weekend, Marogoa said.

"His other excuse was that he could not get a permit to transport the excavator because he was embargoed as the roads to Limpopo would be full of traffic," he said.

The excuses changed every day he inquired about the excavator, said Marogoa. He was eventually told his chosen excavator had serious mechanical problems, so Guimaraes would have to organise another one.

However, when he visited Guimaraes's business place the excavatorwas nowhere to be seen, and even the second excavator he offered was also not delivered as he claimed that he could not get parts to service it, Marogoa said.

"I think he is taking advantage of me as a young business person."

Marogoa said he suspected Guimaraes was intentionally sabotaging him because he told him that he had secured a R300,000-a-month contract.

He said although he had told Guimaraes that his actions were affecting his coal business, his cries fell onto deaf ears as he keeps dragging his feet in refunding him his money despite promising to do so.

"My dreams are falling apart. All I wish is for Guimaraes to refund me so I can [salvage] my business," he said.

Guimaraes told Consumer Line he was prepared to repay Marogoa by the close of office yesterday. However, Marogoa could not confirm payment from Guimaraes as it had not reflected in his bank account at the time of publication.