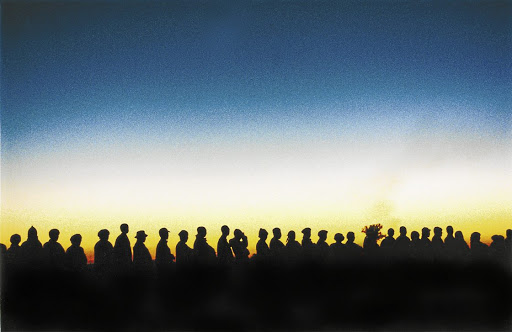 If you do not vote on Wednesday, you have no right to complain when your taxes are abused and idiots misrepresent you in the highest political office, the writer says. / Tiso Black Star

You must vote on Wednesday. Voting is a moral imperative and a governance necessity, even as you are warned not to expect too much.

There was a time before 1994 when only white people could vote in SA. The racist belief was that black people were not fully human and therefore had no moral worth.

You do not need a history book to know that many people died for you and I to exercise our human right to elect a government of our choice.

The graves of freedom fighters are there to remind us that voting in SA is a life-and-death matter.

Even if you think that those who died in the Struggle against apartheid were not fighting for you, you still cannot escape the reality that your not voting will not prevent the installation of a bunch of politicians with the authority to spend your tax.

The politicians who will govern South Africa after May 8 will have the power to rebuild or collapse Eskom further.

It is the vote that will determine who runs our dysfunctional public education system and manage our stinky public hospitals. If you want these essential services to be revitalised, vote for a party you believe can do it.

It is better to be governed by an idiot in whose installation you have had a hand than to be ruled by a sage who has imposed himself.

King Mswati of eSwatini probably fancies himself the wisest soul in that tiny enclave.

But his alleged wisdom springs from the accident of birth. There must be people far more intelligent than the king in eSwatini.

Such people would probably govern better than the king. But ordinary people there have no say in the matter. They are not allowed to vote.

As May 8 beckons, the people of eSwatini can only wish they were born this side of the border.

When they hear that there is a South African who has decided not to vote, they wish such a person was born in their country and they in SA.

We humans are strange. We value things we do not have and take for granted those we possess. Rich people do not think a loaf of bread is an important thing, but the poor wish they could have just a thin slice.

Those who live in democracies tend to think that a vote is insignificant, while those who dwell in dictatorships would thank God for life in a democracy.

The people of the Sudan sleep outside the gates of their military headquarters, trying to get the army to hand over power to a government installed by a vote.

Most South Africans today don't know where their army headquarters is, but some among them still think a vote is something you can treat nonchalantly.

There are those who believe that voting makes no difference in their lives.

Such people have a perverted view of life.

It is better to be governed by an idiot in whose installation you have had a hand than to be ruled by a sage who has imposed himself.

The idea that a vote will suddenly change your life is held by those who do not know how normal life works.

We need the state for things we cannot do as individuals. We cannot build a public road, hospital, school or generate electricity for ourselves as individuals. But we still have a responsibility to improve our individual lives.

After voting on Wednesday, you must figure out what you'll do for yourself on Thursday. No politician will help you. If you wake up in a shack and go and vote, you must expect to go back and sleep in your shack afterwards.

While it is true that voting is a moral and governance imperative, you deserve to know the truth: that a vote is not a magic wand to turn your life around.

Don't cry when the job you were promised never comes. Keep this in mind as you vote next Wednesday.