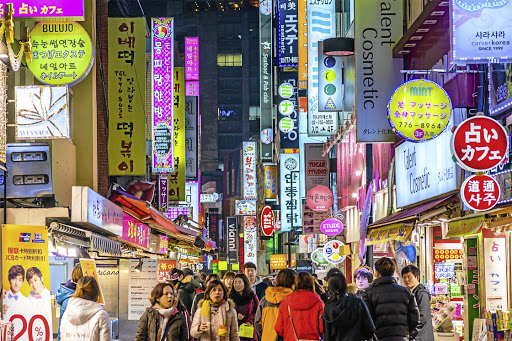 Crowds enjoy the Myeong-Dong district nightlife in Seoul. Despite its small size and ever-present national security threats, South Korea has a thriving economy with proper rule of law.
Image: 123RF

To visit a country like South Korea as a South African is to be haunted by our backwardness as black people.

In South Korea, you come face to face with non-white people who, like us South Africans, were once colonised. Unlike us, the Koreans fought a bitter war (from 1950 to 1953), resulting in the geopolitically tense, North and South Korea arrangement of today.

Geographically, South Korea stands trembling like a small impala cornered by a hungry lion. To the north, a madman, Kim Jong-un, continues to experiment with long-range rockets that can convert South Korea into an untraceable smoulder.

A former coloniser next door, Japan, hangs over South Korea like a dark cloud that reminds survivors of a recent cyclone that almost wiped out an entire population.

Look at the map of the world. South Korea looks like a little eastern outgrowth of a monstrous giant - China. That China in the early 1950s tried to invade this tiny neighbour reminds Koreans even today that you cannot sleep well with such a moody giant at your gate.

What must a country in such a menacing national security dilemma do? For their survival, the South Koreans depend on another foreign giant: the US.

The US continues to maintain a garrison in Seoul. On any given day, US military helicopters hover above the Korean sky, keeping a watchful eye on North Korea, observing the menacing global giant to the west (China), and monitoring the former coloniser in the north (Japan).

We South Africans are not trapped in such a permanent national security trap. No neighbour poses any real threat to us. Our former coloniser, Britain, is busy nursing life-threatening Brexit wounds.

Despite our geostrategic and natural resource advantages, South Koreans, with all their serious national security problems, continue to prove that we South Africans are backward.

Anywhere in South Korea, a woman can walk at any time of the night without fearing the possibility of rape. You can find lovers kissing in public parks at night in the absence of the police.

On a typical weekend, Koreans get so drunk that they pass out by the roadside. In the morning, they sober up and take the next train home, wallets and cellphones still in their pockets.

On public trains, Koreans have seats reserved for the elderly. However full the train may be, no hothead takes such seats. This is civilisation in the domain
of culture.

Economics is where South Koreans shame us the most. People there use cellphones they make themselves (Samsung is an example). Roads are full of locally made cars. Koreans make luxury cars we South Africans have never seen (Genesis is more elegant than an S-Class Mercedes-Benz).

Education in South Korea is valued like religion. The standard of their public schools is so high that there is little difference between private and public education.

In case you have the wrong impression that SA is being subjected to an unfair comparison, consider the fact that South Korea's population is 51 million, crammed in a land space 13 times smaller than ours.

Yet Korea's gross domestic product is $1.5 trillion. Ours is under $349bn.

But why compare black people with South Koreans?

Twenty-five years in charge of a state, the black people of SA celebrate commissions of inquiry, poverty, unemployment, a dysfunctional public education system and other disorders.

On the other side of the ocean, the formerly colonised people of South Korea are making real progress.

What is wrong with us?

Party's reaction to the book exposing Magashule's alleged corruption says a lot about its moral decline.
Opinion
2 years ago
Next Article