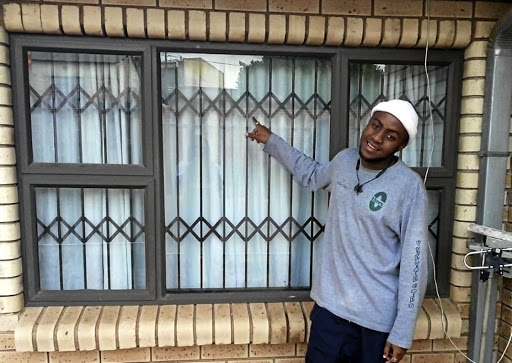 Gloria Sogoni's son Siyamthanda is thrilled that the house now has burglar proofing on the doors and windows. / SUPPLIED

"The Almighty has answered my prayers after 10 years of waiting. I've got my burglar proof!" exclaimed a thankful Gloria Sogoni yesterday.

Her burglar bars were installed on Thursday, she said with a warm hug.

This follows the publication of her plight in which Kevin Bonner, a national sales and marketing manager at Trellidor, said he would assist Sogoni as far as he could to instal her burglar proofing if her complaint proved to be valid.

At the time of publication in March, Bonner said he would trace a 10-year-old deposit which Sogoni made.

Bonner was concerned that her deposit was directly paid into the previous franchise's bank account, but assured that he would trace it.

Sogoni said she was thankful to Trellidor to finally hear her cries.

Sogoni said she was travelling home from night duty when she overheard someone advising another commuter who had a consumer-related complaint to approach Sowetan's Consumer Line for help.

"I asked if I could get help as my problem was 10 years old and the person sharing the information assured me that nothing was impossible with Consumer Line," Sogoni said.

She said she felt blessed when Trellidor told her it would be installing her burglar guards on Thursday morning,

"I did not believe it. I wanted to report this back after they had installed them," she said.

Sogoni 53, of Dube Village in Soweto, was renovating her house when she decided to buy burglar bars from Trellidor in 2009.

She said measurements were taken after the service provider agreed to enter into a lay-by agreement.

MARGARET Phetlhe of Soweto is accusing Kingdom Doors of Lenasia of selling her a fake stainless steel door at an exorbitant price. Phetlhe says she ...
Good Life
9 years ago

The mother of two was only given a quotation and no time limit upon which she would pay for her burglar bars.

Sogoni never visited the Soweto branch thereafter but deposited payment into its bank account until 2014 when she discovered it had closed.

She said she expected the Trellidor to invite her to collect her goods as it was expected to put them away until she had settled the account.

"In the past, most companies which offered lay-by agreements would send a registered letter to ask clients to pay off and collect their goods before they closed down."

She said her consolation was that Trellidor still existed around the country and then began her search for other branches and she found one in Randburg, northern Johannesburg.

The Randburg branch was really helpful as it managed to get her� quotation from the head office in Durban, but nothing happened thereafter.

She was later told her payment was made 10 years ago and therefore it would not be possible to trace the amount paid into the Soweto branch as its account was also closed.

As undertaken, Bonner investigated Sogoni's complaint and treated her as a valued customer by installing burglar proofing, all thanks to Consumer Line.