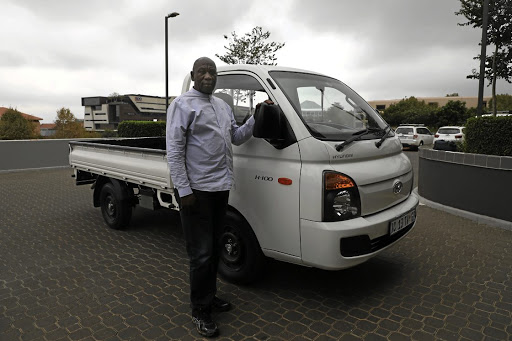 Admond Mbwanakhani has been unhappy since the van's paint began peeling off, six months after he bought it.
Image: Thulani Mbele

Driving around in a vehicle whose paint is peeling off is frustrating, especially when it is new.

Admond Mbwanakhani from Germiston has been unhappy since he bought his Hyundai van in 2014.

Mbwanakhani said he had been driving his car for six months when he noticed its paint was peeling off.

He said if your vehicle is from the 1970s-1990s, then it's plausible for this to happen to it, but not a car manufactured in the 21st century.

Mbwanakhani said manufacturers had that paint problem during those earlier years due to changes in painting processes, resulting in the failure of the paint to adhere to the metal.

"This is a thing of the past and should not be happening any longer," he said.

He brought the manufacturing defect to Hyundai's attention as soon as he picked it up, but the car maker only attended to it three years later when the paint started peeling of in flakes, Mbwanakhani said.

"The delamination can only happen when there is improper preparation of the surface of the car and this causes the primary layer to lose adhesion to the metal."

He said it was only in 2017 that Hyundai confirmed that the peeling was a manufacturing defect and offered to respray the bakkie, but still delivered shoddy workmanship.

"The car now has two shades of white and it has not stopped peeling," said Mbwanakhani.

VW South Africa yet to solve the problem.
Opinion
3 years ago

He tried taking it back to Hyundai in February but was told the van's warranty had expired.

He believes he has been treated unfairly as a customer.

At the end of last month, Roger Placido, service manager at Hyundai in Germiston, requested more time to respond as he had escalated the matter.

He undertook to respond by Friday, but had not done so at the time of publication.

Reasons why car paint peels away

Improper preparation of the painted surface.

It can also happen when the seal of the clear coat paint gets compromised by a chip or scratch. The clear coat provides a hard shell that protects the paint from oxidisation and minor scratches, and increases the longevity of the aesthetic benefits of the coloured paint.