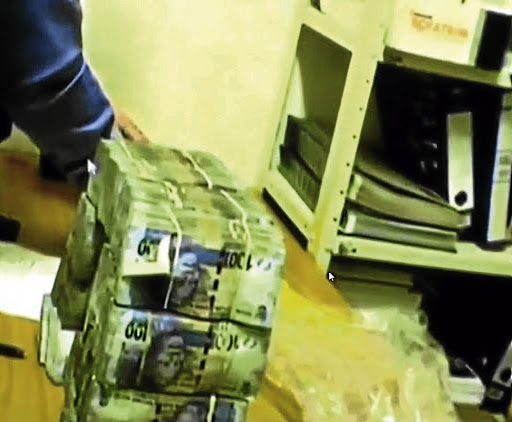 Footage of cash being counted in the Bosasa vault as cash flies especially in the direction of those who are politically connected, says the writer.
Image: Supplied

This week's episode of Game of Bags opens with President Thuma Mina's son looking straight into the camera, tears in his eyes (are they of regret or is he just acting?) and saying: "This was the business decision I shouldn't have entered into. I regret the day I started working with them."

He is, of course, referring to an amount of R2m that he received from the gangster of the moment, Don Gavisconi Wazzoni, and his Bhozabhoza Group, now called Global Africa Systems Whatever-whatever.

Watching Andile denounce his former business partners, one wonders if the man would have been so candid and open with the nation had D'Angelo Lagrizzi not sang his memorable songs at the Zondo commission about the corrupt relationship between the Bhozabhoza group and a number of ANC top brass, including Comrade Mvula'iyana of the famous Louis Vuitton bag, braai packs and whiskey.

Listening to testimony during the Mpati commission into the Public Investment Corporation one is struck by a sense of deja vu. It sounds like yet another episode from the Zondo commission.

The common feature, of course, is the frenetic exchange of money bags and more names of hitherto respectable persons are brought to the fore.

President Cyril Ramaphosa has maintained he did not lie to parliament and that the R500,000 donation from Bosasa boss Gavin Watson was paid to his ...
News
2 years ago

In startling revelations, a number of top Khongolose leaders are said to have received their own bags of cash in underhand deals at the PIC. No braai packs and whiskey hampers have been mentioned yet, but one suspects there was a lot of celebrating with each deal.

Businessman Amir Mirza is said to have made R24m in a facilitation fee for referring Siyabonga Nene, head of the controversial S&S Oil Refinery, to the PIC for further funding. Siyabonga Nene, is the son of Nhlanhla Nene, who was minister of finance at the time. He subsequently lost his job. Did he lose his job because his son hadn't shared with Gedle? Moving right along.

The mention of Nene is a disappointment because the man has always come across as a straight-as-an-arrow kind of chap. But he seems to have looked the other way while his son got involved in what is now coming across as another case of dirty bags of cash flying all over, especially in the direction of those who are politically connected. Or maybe we don't know the truth.

While these money bags are flying all over with alarming regularity, the people of Mzansi are boiling with righteous indignation as the crisis at Eishkom deepens.

If you take a casual walk in some of our finest mink and manure suburbs - you would be forgiven for thinking you'd landed in Lagos. The streets, enveloped in semi-darkness, are rumbling with the noise of generators.

If there was ever any doubt Mzansi was a Third World country that doubt has now been dispelled. Seemingly we are competing with Venezuela which recently experienced a nationwide blackout. No load-shedding for these chaps, that's for kids. They go for a national blackout. The entire nation with no power. We're getting there.

This saddening, infuriating state of affairs drove the former vice-chancellor of the University of South Africa, Barney Pityana, to wail in a recent speech: "We have become an aggressively filthy, selfish, individualistic and greedy society that cares only for itself and its own. watching the shenanigans that reveal themselves on our TV screens in the Zondo commission, the Public Investment Corporation inquiry, the VBS Bank scandal and the escalating troubles at Eskom, I ask myself where these people come from. It is like a horror movie, but it is the story of our lives."

Fade out. Voice-over: Game of Bags, the plot gets thicker.

More details about the alleged corrupt relationship between Bosasa and environmental affairs minister Nomvula Mokonyane have emerged at the ...
News
2 years ago
Next Article