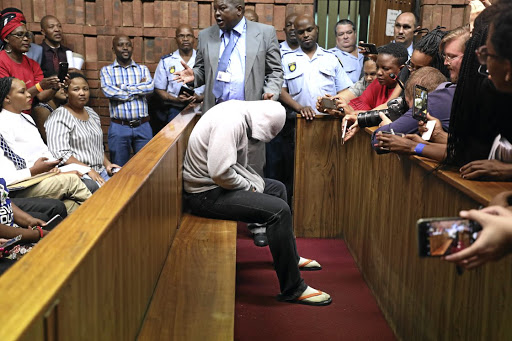 Nicholas Ninow is accused of raping a seven-year-old child in the bathroom of a Dros restaurant in Pretoria. Some commentators think the accused may not have done it to a white child.
Image: Thulani Mbele

The other day I came across a book which compared lynching and sexual assault of black women in the US.

During US racial oppression, black males were lynched as a form of punishment, for a variety of reasons. Fundamentally, lynching was justified as "necessary to protect white women from male rapists", but a memorial for victims of lynching which was opened in the US last year revealed that women too were victims of lynching, thus pouring water on the said justification, according to Evelyn Simien.

Women were, however, raped beforehand, she says, and somehow stories of female lynching were left out. What research now reveals is that both lynching and rape were in fact both forms of terror which were racially motivated and were used to threaten the lives of black people in the US.

This happened to Annette Butler in 1956 when four white men in Tylertown, Mississippi, formed a pact to hunt a black woman in order to rape her. And so, they entered Butler's home armed, kidnapped and dragged her into a nearby swamp and raped her.

What struck me about this US history is that white males indeed used sexual assault as a weapon to undermine and dehumanise black females.

For decades, US law did not even acknowledge complaints of rape by black women and, as a result, US women of colour endured unabated white sexual terror.

Reading this reminded me of a heated conversation I had with others and a friend of mine, let's call him Paul, who in the midst of our conversation about Nicholas Ninow, the man who allegedly raped a six-year-old girl at Dros, vehemently proclaimed: "Ninow would not have done that to a white child!"

He stated further how he found it appalling that his comments seem to be some kind of taboo. As if his views were impossible to fathom, let alone be correct.

He also reminded us about a tweet by a white woman who stated that it was not in their (white people) culture to rape - when news broke about Ninow. He said this was worrying, and fundamentally wrong.

Hidden calamity of acquaintance rape is slowly revealing itself

Paul was quick to remind us about the well-known stories of sexual terror black domestic workers had to endure in the hands of white men at work. He described the history of white sexual terror as an open secret that still exits but that we hardly ever talk about. Do these comments make Paul a racist? No, they do not.

He further relayed his discomfort that society in general tends to speak freely about rape being part of black culture while the idea of white men raping black women remains a taboo. Why is that?

To begin with, as much as there are those who believe that rape is part of black culture, it is disingenuous to disregard the history of white sexual terror on black women, and that white rape culture also exists.

But is it a sin to be race-conscious given that the nature of Ninow's alleged act was so horrific that it could only have been intended to dehumanise and brutalise that black child? Ninow's is unlikely to ever admit that he may have hunted his six-year-old victim on the basis of her race, but we should not also disregard the history of white sexual terror on blacks.