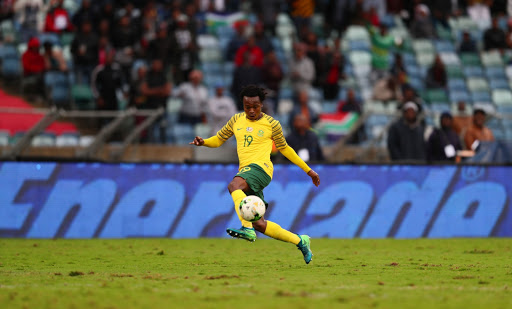 Bafana Bafana qualification for the Africa Cup of Nations finals was a rare success and it came at the time when some pundits had written them off based on their past failures.

But on Sunday night in Sfax, Tunisia, our boys made us to believe in them again and they raised some hopes that they can finally emulate the Class of 1996 that conquered the continent.

The Percy Tau-inspired speeding juggernaut saw Bafana beat pre-match favourites Libya
2-1 and secure a rare Afcon qualification. Though it was a collective effort, Tau was a cut above the rest, scoring two beautiful goals.

The victory was secured against all odds, considering the hostile reception and intimidating tactics whenever SA sides play in the unwelcoming north Africa.

As expected on Sunday, Libya loyalists at the packed Stade Taïeb Mhiritried all the tricks in the book to intimidate our boys and match officials by throwing all sorts of objects on the pitch.

But Bafana stood firm and refused to bow to any sort of intimidation and focused on the job on hand which they delivered with sheer aplomb. Bravo Bafana!

The triumph also came despite some questionable decisions by referee Nooreddine El Jaafari, from neighbouring Morocco. El Jaafari was put under tremendous pressure by fans and Libya players who consistently argued.

The referee appeared to bow to pressure, when Darren Keet's leg brushed up innocuously against Mohamed Saltou, who deceived the referee into awarding a contentious penalty.

But coach Stuart Baxter had his tactics right on the night. He opted for a rather conservative approach with five defenders and two midfield enforcers. They waited for Libya to throw the bodies forward and then beat them with counter-attacks and pace.

Now that the qualifiers are out of the way, we urge Safa to start preparing the squad for Herculean task awaiting Bafana in Egypt.

They should line up opponents worth their salt to prepare Bafana thoroughly for the finals.

There's no doubt that Sunday's win will go a long way in changing the attitude of the players and we are convinced that they go to Egypt not to add to the numbers, but to conquer the continent.