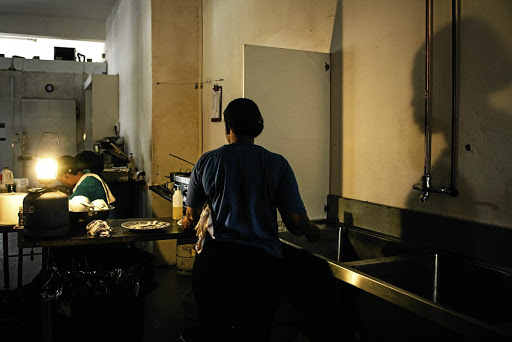 Workers in a cafe use an emergency gas-powered lamp to illuminate the kitchen during a power outage.
Image: Waldo Swiegers/Bloomberg via Getty Images

As the Game of Bags crew gets ready to go and shoot the next episode of the popular series, our offices are struck by load-shedding.

Thankfully, our cameras are fully charged and we also have back-up batteries. Off we go to the bush where illustrious members of society are having a secret prayer meeting.

Pastor Bufirifiri is to officiate, aided by Pastor Nalanala, the rotund polygamous cleric from Durban. Some inyangas and sangomas are also in attendance. All here to pray for electricity.

The service is inside a huge tent, an industrial generator droning outside to keep the lights on.

Before the service starts, Pastor Bufirifiri announces: "God does not listen to pleas that are not accompanied by the whisper of bank notes. No coins, please, but we've got a card-swiping machine if you don't have bank notes."

Eskom CEO Phakamani Hadebe spoke to Radio 702's Clement Manyathela on Tuesday about what the power utility is doing to solve the current spate of ...
News
2 years ago

The service is opened by a sangoma who says electricity outages enveloping the country are the work of witchcraft. Mzansi has been bewitched by the Devils from The North. Let us send them bolts of lightning!"

Minister Preevin Godown gets on stage and says the prayer meeting is a waste of time. Load-shedding was as a result of theft by high-powered individuals at Eishkom. When a heckler from the floor asks why the individuals haven't been arrested, Godown shrugs: "Don't quote me, but Nkandla still controls things."

Somebody throws a half-chewed chicken bone at him. "Leave Gedle out of this! He handed power to you Thuma Mina fools on a platter. You've failed to distribute power around the citizenry. Now the citizenry is sitting in darkness without power. Blerry cabal!"

Before Pastor Bufirifiri takes the floor, his DJ plays his opening song, the old Harari hit, Give. While the congregants are reaching for their wallets the generator cuts out. Lights go out.

Security rushes outside. A bakkie is seen speeding into the night. The generator has been stolen. Some members of security get into their own bakkie and give chase. Meanwhile, back at the tent, people who've been thoughtful enough to bring candles and braziers, light these. Pastor Bufirifiri, looking like a tokoloshe on the stage, raises his arms to speak.

But a nervous-sounding voice echoes from somewhere in the dark: "The Khongolose elders have issued a statement from which I've been asked to read. It says, we, long-serving members of Khongolose, request comrades who have been implicated in corruption reported in the commissions of inquiry and elsewhere, or were during the past five years adjudged to have behaved unethically by, for instance, lying under oath, to reconsider their present nomination for parliament or the provincial legislatures."

Then from the back, somebody with a voice that would make Satan freeze in his tracks says: "What's that statement got to do with electricity?"

Candlelight falls on a man wiping a moustache of gravy from his upper lip. He says: "I don't care what the so-called elders say, but what I will say is this: electricity is an over-rated colonial invention meant to bring us down... A man can't slurp his gravy without a computer recording him. Were it not for electricity and computers, we wouldn't have heard of Gupta leaks and all that nonsonso. If we have to go to wood and fire, so be it."

Fade out. Voice-over: Game of Bags, the plot gets thicker.

Eskom powerless over blackouts - fixers in the dark

Brace yourself for at least two more weeks of darkness as the government scrambles to find a solution to the country's energy crisis.
News
2 years ago

'Eskom is lying to us': Power cuts already near stage 5‚ warns energy expert

Despite assurances that Eskom is not planning to ramp up load-shedding‚ the embattled power utility was a hair's breath away from stage 5 blackouts ...
News
2 years ago
Next Article