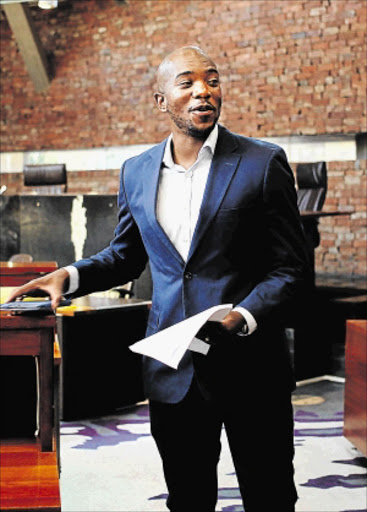 Graduate of Gedle school of math

The English say: "Whom the gods would destroy they first make mad."

Vera once read somewhere that Mmusi Maimane is a man of the cloth who came into politics as a fulfilment of a prophesy that he would be president one day.

So she is not suggesting that the gods seek to destroy this apparently anointed young politician. But what are we to make of our "future president's" recent public gaffes?

A few weeks ago, during a presser outside the Union Buildings where he was showing reporters how good the presidential lawns looked on him, Maimane had everyone confused when he declared: "I stand as a man in South Africa, who is a husband to one wife and a mother of a daughter..."

Just as Luthuli House was still drafting a press statement to ask the Zondo commission to investigate how Maimane can have the privilege of being both husband and mother, he stunned the nation by exposing his innumeracy.

According to pastor Maimane, unemployment has become so endemic in South Africa that "in fact, 44 out of 10 South Africans don't have a job".

Perhaps it is time we decolonised that English saying by giving it a local slant: "Whom the gods would make president they first make Jacob Zuma".

Vera could not help but notice that ever since it dawned on Madam GodZille that she is about to join Baba in the league of retired politicians, she has been refashioning herself as an English spelling teacher.

When musician Danny K took to social media to talk about how many of his white compatriots are still in denial about white privilege, which he spelt PRIVELDGED, the school teacher in Madam GodZille made her Tweet back: "You need some spelling lessons".

Vera thinks she should consider using her spare time giving counting tutorial to her protegé, he of the cloth.

Give her Woolies water

Let's be honest, very few of you knew what a combi court was. In fact, when Vera first heard of the term in that leaked and heated audio featuring Gauteng MEC Faith Mazibuko, she initially thought it referred to some form of a mobile court of law.

We have now learnt they actually have something to do with sporting facilities.

There is so much that was wrong with what the MEC said in that recording - from her bullying of the officials to her insinuation that she was prepared not to follow procedures just as long as she was able to use state resources to benefit Khongolose at the polls.

But what Vera would remember the most is when she shouts: "It doesn't matter don't tell me English, I want combi courts".

And then her anger causes her to totally lose faith in her English and resort to Zulu even though the officials she was addressing only speak English: "Hhe, khulumani nithini? (Talk, what are you saying?)

At this point, Vera thinks, the officials could have assisted the MEC by giving her a bottle of Woolies water.

The conversation would have turned exquisite. It would have been amazing.

Singing for his supper... and seat

The election lists are finally out and Vera notices that the Red Berets have musician Ringo Madlingozi as one of their candidates for the National Assembly.

Vera isn't sure of Madlingozi's debating abilities, but if the on-again-off-again bromance between Juju and McBuffalo results in a coalition after elections, expect every State of the Nation Address to begin with a serenade from the Sondela Sthandwa hit singer.

Bleh Tuesday? Let the special powers of Woolworths help you.
News
3 years ago

The EFF’s senior leadership stands at the top of the party’s list of candidates for parliament after the May 8 general elections.
News
3 years ago
Next Article