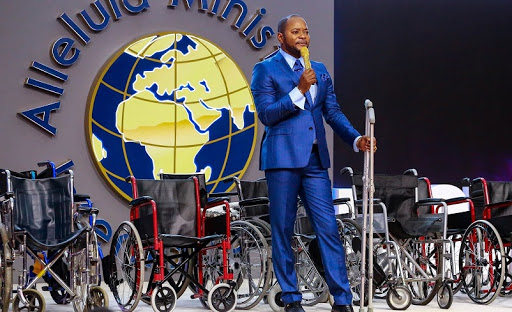 It is with great sadness that I write on the issue of disability and the prophets. It took the fake raising of a dead person from a coffin for people to finally come out and speak strongly against the charismatic churches whose messages are based on prosperity.

It would seem to me that miracles are performed for the purpose of increasing the numbers of followers and in the process increase the income through tithes and offerings. It is no longer about the glorification of God. A closer look into the life of Jesus would make one realise that He was never reckless with the performance of miracles, they all had a lesson to teach.

He even warned that our faith should not be based on miracles but on the word of God. And despite all the miracles that Jesus performed, He never chose to live a flashy lifestyle. He even says in the Bible that foxes have holes and the son of man has nowhere to put His head.

What's worrying is that almost all these charismatic churches claim to have powers to heal people with disabilities. Their claim stems from the fact that Jesus healed a good number of disabled people during His time on earth, including blind Bartimaeus, the paralytic brought by four friends, and also raised among others His friend Lazarus, who had been dead for four days. These are the people known in their communities to have disabilities.

Peter and John also healed a disabled man they found near the gate of a temple on a Sabbath when they went up to worship. They asked him to take up his bed and walk. While in the temple, the Pharisees saw him and noticed that he was the one who used to sit by the gate.

With our current prophets, they heal disabled people that are never known to the community. A person appears in a wheelchair or crutches and is brought to the stage. They pray for him or her and the person stands up and walks.

In Sowetan Live of February 28, pastor Alph Lukau appears on stage with many wheelchairs behind him while holding a pair of crutches purported to have been left by disabled people who had been healed. What is not noticed by the unsuspecting public is that all the wheelchairs are new, including the crutches. If surely they were being used by the disabled people, they should be old and gathering dust.

The church members, including community members, don’t know the people that used those wheelchairs before. We should be able to know them before they are healed and (they should) confirm that indeed they had been using a wheelchair.

I call upon the media to investigate these fake miracles performed on so-called disabled people and to expose the false prophets for what they really are. These fake miracles worsen the negative attitudes against some of us who continue to be disabled despite what the prophets are doing. It means those of us that continue to be disabled are of little or no faith in the ability of God to heal us.

As disabled people, we also want to live our lives without being subjected to fake miracles. If you know what you are capable of as a disabled person, your disability can be a blessing. I truly enjoy my life as a disabled person. I am a father of three and have a degree. There’s nothing attractive on this side of heaven with being nondisabled. So these pastors must leave us alone.