Welcome to Eureka, a whites-only paradise on prime real estate 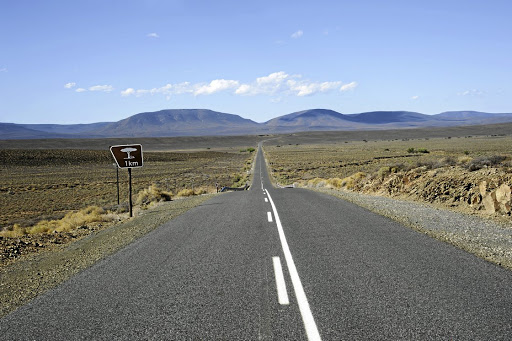 Highway passing through the Central Karoo region of SA near Matjiesfontein looking toward the Komsberge Mountains.
Image: 123RF

It's off to Garies, in the Northern Cape, for this week's episode of Game of Bags.

Voice over: "The landscape here is a breath of fresh air for the followers of this series which has thus far been playing out in the stultifying ghettoes, towns and cities of Mzansi.

"In the Northern Cape, you can stand on a small kopje and you will not see much, but stretches of land as white and dry as the sky itself. The sun is everywhere. Tufts of vegetation struggle for dear life on the unforgiving aridity."

Then, into the camera view enters our hero. He is smiling, exuding confidence.

Voice over: "This is Adriaan Alettus Nieuwoudt. His smile is as white and vast as the land he is standing on. He has every reason to be proud. He has bags stuffed with cash behind him. And right now, he is standing on prime real estate. You too can join him in this paradise. If you're white."

Close-up on Nieuwoudt speaking to the camera: "Pride is a sin. But I can't help it, right now I'm on cloud nine. We call this corner of the world Eureka. Yes, we white people have found it! After 25 years of hell as victims of genocide. The longest genocide in history."

Nieuwoudt pauses to gather his thoughts. Tears in his eyes, he continues: "The sins of being white. You clear your throat, they accuse you of saying the k-word and they throw you in prison. You make a comment about baboons and monkeys, they put you before a firing squad. And you aren't allowed to say '#WhitesLivesMatter'."

In the background, the viewer can hear excited voices chanting "Free at last!"

When the lights go out and electricity off, it can be as cold as Comrade Gedle's heart
Opinion
3 years ago

Smiling, Nieuwoudt says: "Free at last indeed!" Then, he raises his hands in the air to calm his followers.

Nieuwoudt continues, "I'm not going to say anything about corruption in that place called SA, where we were before we got to this Promised Land. How many investigations into corruption are they engaged in? Let them stew in their gravy.

"Eureka is an attempt to re-establish our white people in safety. Here we empower the entire white race to independently, within our own means, in our own fatherland, build a future.

"In this way we can again let the white race, without bloodshed, acquire a piece of their birth land. We've signed an MOU with our neighbours in Orania, the citadel of white common sense and [success]. Don't misunderstand us: we don't hate black people, only that we love white people more."

Camera cuts to a TV news reporter: "In news just in, we've established that the man behind the creation of Eureka, the whites-only town in the Northern Cape, is none other than the businessman who, in the 1980s, started the infamous Kubus scheme.

"In terms of the scheme, investors [sorry, whites only!] would buy a mixture of cheese and milk culture from Nieuwoudt. They would then grow it in glasses and dry it into a powder before re-selling the powder to Nieuwoudt. At the time, he claimed that he needed the dried powder to develop a skin cream product.

"However, there never was such a product but simply a cover for a pyramid scheme which finally collapsed. By that time Nieuwoudt had raised R140m. He was found guilty of diamond theft and illegal diamond dealing in the 1990s and sentenced to eight years in jail."

Camera cuts to: a group of white people: "Leave Nieuwoudt alone! Don't dredge up the past! End white genocide!"

Camera cuts to an elderly man in front of his TV, muttering: "Victims of genocide? But they're still alive." He calls out: "Child, bring me that dictionary!"