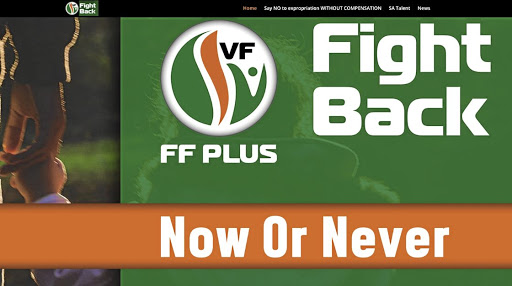 The 'Fight Back' message from the FF+ seems to suggest a people under attack, says the writer.

"Fight Back", the Freedom Front Plus's campaign slogan, conjures up an image of a people or community under assault.

An attack on affirmative action and black economic empowerment, policies instituted by the ANC-led government in a bid to increase the participation of black people in the economy, features prominently.

According to the FF Plus, these policies have led to minorities losing their jobs, not being able to find work and to poor service delivery.

This statement creates the impression that competence resides only in minority groups.

According to Statistics SA's population estimates by mid-year 2018, whites, coloureds and Indians (Asians) make up 7.8%, 8.8% and 2.5% of the population respectively.

Minorities thus make up 19.1% of the total population, far off from the 80.9% of the black population.

Any party that aims to win elections and ultimately govern the country should logically be targeting the majority. That the FF Plus has directed its efforts to highlighting the plight of minorities indicates that the party is unapologetic about alienating the broader population in an effort to consolidate the minority vote.

On crime, the party zooms in on farm murders to draw attention to the killing of white farmers in particular.

It states it believes in the principle of subsidiarity which emphasises the federal features of the SA state.

DA manifesto on pulse of citizen's concerns about SA's challenges

Infighting among party's leaders has obscured good record of governance and may affect poll campaign.
Opinion
3 years ago

"The key point of the FF Plus's policy is to transform South Africa from a territorial state to one where communities are the fundamental units and where the government acts merely as a commonwealth. . to achieve that, republican thinking must be revived."

What follows this key point are arguments for the revisions of local government, making communities central and entrenching self-determination.

In all, the FF Plus envisions a society where every community takes charge of its own service delivery, education and social services, and preserves its heritage. Linked to that is providing for their own energy needs. And municipalities should comprise single towns.

It speaks of the creation of councils to realise this ideal of "community". Though the manifesto asserts this not a form of racial segregation, if implemented, this proposition would result in the racial fragmentation of the country.

This model curiously sounds like an endorsement of Orania, a small town in the Northern Cape famous for undertaking a project of self-sufficiency and practising racial, cultural and lingual exclusivity and exclusion - an Afrikaner-only enclave.

Under PR, different groupings may be represented in parliament. Unfortunately, this strength can also lead to the unintended consequence of fragmentation. It tends to encourage political parties to hold divisive and extreme views to appeal to and win the support of socioeconomic, racial, ideological or other interest groups.

The incentive for parties to appeal to broader society rather than a small minority is weakened by the strong probability that parties can and will win some seats in the National Assembly and provincial legislatures; and can gain control of municipal councils. The FF Plus is one such party.