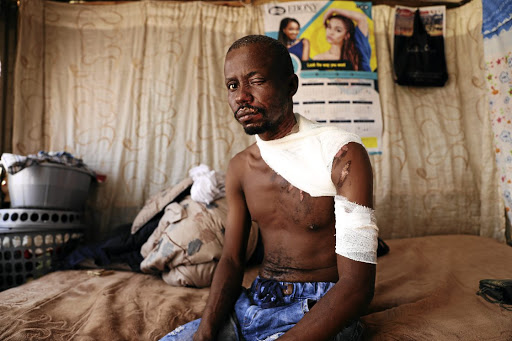 James Mazibuko was badly burnt with oil allegedly by the mother of his two children during his visit to the kids in Zondi, Soweto.
Image: Mduduzi Ndzingi

We should talk about it, that is, domestic violence perpetrated against men. It is uncomfortable and hardly spoken about.

The reality is that we should confront this monster in our society. The ostrich attitude a lot of us have on this topic is unhelpful; we talk about it in hushed tones because it shames us as a society. We joke about it, we trivialise it and make a mockery of those affected by it. We dismiss the pain a lot of men go through because they must "man up" and be "true men".

Men die with this pain and shame because they wanted to belong by not showing any sign of being unmanly. Some commit suicide for fear of being humiliated.

I recently asked a close friend about violence against men and his retort was emphatic and dismissive.

He said: "I have no sympathies for men who are violated or abused, they deserve it. I wish that they get double their own medicine."

He went on to say, "please don't waste your precious time by listening to men who claim to be violated - be it physically, emotionally, sexually, financially or psychologically. For heaven's sake, there are other important things we can talk about other than focusing on the non-existing, unfounded claims of abuse experienced by men". His denial perpetuates this sad narrative that men can't be violated.

Sowetan recently reported on a case of violence against a man. James Mazibuko was burnt with oil allegedly by the mother of his two children during his visit to them in Zondi, Soweto.

SA needs to create a culture where boys are taught to respect girls’ bodies in order to help reduce rape culture.
Opinion
3 years ago

Mazibuko said: "I found her cooking on the stove, there was a pot of pap and a steel mug. The children came to me with their homework and I helped them."

He went on, "my wife asked why I left her when she needed my support". He asked what support she needs, because he paid the rent and looked after their children.

His wife went on to say "I thought you'd come back to me". Mazibuko's response was that he had moved on with his life, and at this stage she allegedly poured hot oil on him.

This goes to prove that abuse perpetuated against men is a reality. Sadly, when men report these cases, they are not taken seriously.

Let me congratulate the Jabulani police station who, according to Sowetan, acted decisively by taking down his statement and arresting the mother of his children.

This is what is expected of the police. I am convinced that there is an urgent need for officers to be thoroughly trained on the domestic violence, sexual violence and sexual harassment acts.

You may be assuming that it is a given that the men and women in blue are trained on these laws, but sadly, it is not.

Ask men in your community who might have had to report cases of being raped, beaten up, abused or being denied access to their children after a divorce. I bet you a penny to a pound they will confirm that there are instances where police will not do as the acts require them to.

What is sad about this phenomenon of abuse against men, is the ripple effects it has in our society. I have heard men in my training workshops say "the system has failed me, no one listens to me, women are believed more than us men, what do you expect me to do?"

Some have said, without blinking an eye, "I will take the law into my own hands, I will sort her out, I will show her who the real man is".

We are raising a generation of men who believe in "an eye for an eye" solution. If we continue denying the existence of violence and abuse against men, we will reap the wild wind of violence as we see happening in our country.

I strongly believe violence begets violence and it is true that those who were hurt, go on to hurt others. Let's do something about violence against men if we are to make leaps in fighting violence in our society entirely.