DA manifesto on pulse of citizen's concerns about SA's challenges 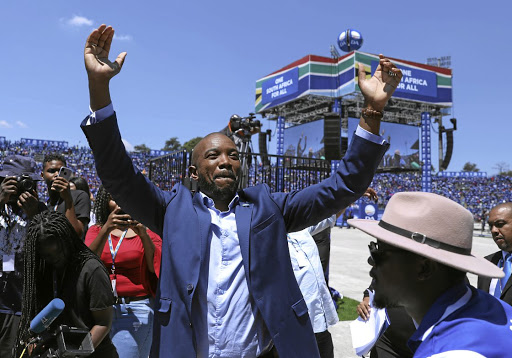 Mmusi Maimane during the the launch of the DA election manifesto launch at the Rand Stadium in Johannesburg, in which he says the party can drive SA to where it needs to be.
Image: Simphiwe Nkwali

The DA was the last of SA's three major parties to launch its manifesto at the weekend.

Like the ANC and the EFF, the DA has placed jobs front and centre of its proposition to voters.

With its added focus on crime and corruption, the DA is on the pulse of what South Africans believe are the most serious challenges facing the country as revealed in the South African Citizens Survey for quarter four of 2018, conducted by Citizen Surveys.

On jobs, the party commits to enact a Jobs Act that will provide incentives for new and existing businesses that create new jobs by allowing, among others, the repatriation of profits, relaxing exchange controls and making it easier to hire and fire employees.

The DA identifies trade unions as among the barriers to job creation, in contrast to the ANC and a direct attack on its alliance with trade union federation Cosatu, asserting that these protect the interests of their own elite rather than that of workers.

Weighing in on the land debate, the DA proposes rather to redress imbalances in land ownership and property beyond agricultural land by ensuring the extension of title deeds and prioritising urban land reform.

On corruption and state capture, the DA proposes a 15 years minimum sentence for those found guilty and to ensure that all stolen money is paid back.

And on crime the party proposes to give the policing competence to provinces. This speaks directly to its long-held view that the national government has bungled the fight against gang violence and other serious crime in the Western Cape.

As the official opposition, the DA has constantly punted itself as the better alternative to the ANC, claiming it can deliver clean and efficient government, jobs and services for all.

"South Africans face a choice. A choice between the corrupt, old, disorderly ANC and the honest, capable, modern and orderly DA. The ANC has made a total mess of governing, and it is only the DA that will restore order through rules and accountability.

"The DA has proven that we are capable of managing the real problems that South Africa faces. "Where we govern, we deliver for all and we deliver far better services faster and more effectively. We are a vehicle that can drive our country to where it needs to be."

The manifesto is littered with references to the contrasts between the ANC and its governance and that of the DA.

The DA has run the City of Cape Town since 2006 and the Western Cape government since 2009.

In 2016, the DA chipped away at the ANC's majorities in key metropolitan municipalities, receiving the opportunity to lead councils in Nelson Mandela Bay, Tshwane and Johannesburg metros.

This was the best election campaign platform any opposition party could ask for three years before this year's national and provincial elections in May.

Not winning outright majorities in the big metros means that the electorate feels that the DA still has something to prove.

Like taking over the City of Cape Town was a stepping stone to the party eventually winning the Western Cape, running these metros is a definite path to taking yet another province away from the ANC.

The DA has generally done better than many ANC-led municipalities and provinces on administration, service delivery and jobs, but infighting in Cape Town and Tshwane in the party have obscured its good record.

The internal wrangling and allegations of corruption by party leaders against their own has in all likelihood added to the growing perception that the country is headed in the wrong direction, as revealed in the citizen's survey.

By its own admission 2018 was a bad year for the DA's campaign. Like the ANC learnt in 2016, "a good story to tell" may not make voters turn a blind eye to scandals.