Leadership bar is not the name of a watering hole 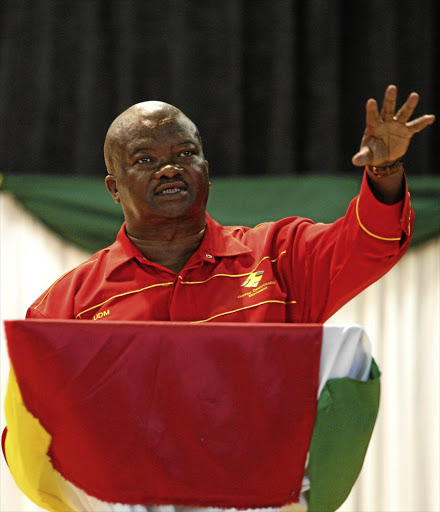 How low can you go?

Was it Joel Netshitenzhe, the ANC intellectual-in-chief, who warned us about the dangers of lowering the standards in electing leaders?

Vera is not big on political quotes, but she seems to remember that Netshitenzhe once commented that the danger with putting the leadership bar too low is that then the rest of society has to bring itself down to the level of the elected leader.

What the man who should have been president some day didn't say, however, is that electing the likes of Baba ka D leads to every Tom, Dick and Bantu thinking he too can be president.

Did you hear the one about that guy who used to run Transkei and is now leader of a political party that can hardly fill a kraal in Qumbu?

The general, as he calls himself, apparently has this idea that after May 8 he would be able to demand to be made deputy president in a coalition government.

Vera is no political pundit but suspects that after the results are in, he would be very lucky to be in a position to demand an ambassadorship from the president - not to mention a cabinet post.

While the Holomisas are dreaming of Union Buildings jobs, other politicians, it would seem, have decided to make themselves presidents of their own neighbourhoods.

Take councillor Morake Gilbert Molefe from a ward 31 somewhere in North West. This politician has realised that he would never make president or premier and so decided he will organise for himself a ceremony befitting of a head of state.

Bantu Holomisa wants to be the country's deputy president

UDM leader Bantu Holomisa has expressed a desire to be deputy president of the country.
News
2 years ago

This week he invited residents in his area for what he calls the state of the ward address!

What's next? Is somebody going to have a state of the homestead address? Oh oh, Vera may have given some famous resident with a large family somewhere down in Nkandla an idea.

Deserving a pat on the back

Heard at a watering hole in Cape Town recently: Aunty Pat de Lille named her party Good probably because she feared some in her ranks would not be able to spell excellent.

Narcissist lord of all he surveys

Speaking of spelling, did you guys see that front page boo-boo in one of those Cape Town newspapers currently owned by Dr Iqbal Survé?

They actually misspelt their owner's surname on the front page, calling him Survey! The next day, probably on the insistence of the good doctor or one of his henchmen, they issued a front page apology to him.

This is what you get when newspapers are run on shoe-string budgets. But before you editors and sub-editors at Sowetan start laughing at your colleagues at Independent, Vera would like to point out that "accused" does not have three Cs! On a front page, nogal!

Vavi it's cold outside

Vera has never bought this story about it being cold outside of the ANC and its alliance. But this week she had to wonder a bit as she saw former Cosatu general secretary Zwelinzima Vavi round up a small band of his friends and camp outside parliament on Wednesday just to get some attention from the government he used to prop up.

His excuse was that they were there to protest against finance minister Tito Mboweni's budget.

But when Mboweni arrived from the parliamentary precinct to receive their memorandum of demands, you'd swear it was a gathering of old friends - and not a class struggle between a neoliberal minister and socialist workers. Vavi's friends joined the minister in song and dance.

Maybe it is time the alliance took Vavi back. After all, his archenemies Baba and S'dumo are now no longer calling the shots.