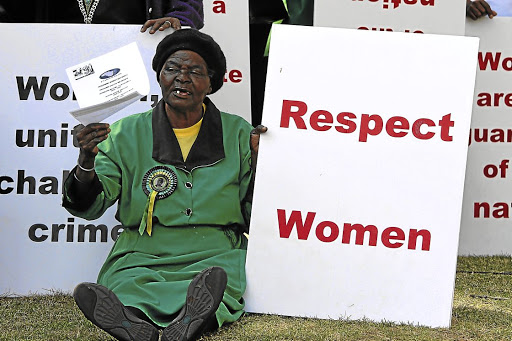 Letting Pule Mabe off the hook is not sound in law, it exposes the ruling party's lack of polciy around this issue as it tries to fend off a possible civil claim since he was in their employ at the time.
Image: Halden Krog

Last week, I was invited to present a research paper at a university in Johannesburg. South African and Indian colleagues gathered to discuss and explore sexual violence within the legal system, in universities and political movements in both countries.

With arguments from the conference still fresh on my mind, I was stunned to read that spokesperson Pule Mabe had been cleared by the ANC of sexual harassment allegations.

How the ANC came to this decision is vague. However, from the various reports I read, their decision seems irrational, unreasonable and based on material errors of law. I also wondered about procedural fairness - given that the ANC has no sexual harassment policy.

One of the panel's recommendations was that the ANC should adopt a sexual harassment policy.

It is appalling that the governing party has no sexual harassment policy, considering that it was the ANC Women's League, together with Unisa's Centre for Women Studies in 1993, which carried out the first survey on sexual violations in the workplace.

The survey revealed that companies did not take sexual violation "seriously" and only 6.5% had a policy to deal with the "problem".

I am not surprised that Mabe was cleared. Finding him not guilty was in the interest of the party. A guilty finding would have exposed the ANC to a civil claim, because Mabe was in its employ and was acting in the course of his employment when the alleged sexual harassment occurred and the party owed a duty of care towards the complainant, who is also an employee.

According to reports, the ANC grievance panel, chaired by Sdumo Dlamini and Thoko Didiza, "ruled that the complainant's version was not supported by evidence", while Mabe's version was "corroborated by witnesses whose relevant evidence the complainant did not refute or challenge".

This evidence is alleged testimony by Jacob Khawe, who testified that he and Mabe left the complainant's room together after work.

According to the panel, the complainant failed to "question or challenge" his statement. This is vague.

It raises questions about the procedural fairness of the hearing. It doesn't make sense that Khawe would not have been cross-examined by the complaint.

Another strange finding was "regarding claims that she lied about her qualifications..."

It is an organisation's responsibility to vet candidates and check qualifications before employing them. For Mabe to slash her salary because he found that she had lied in her CV is malicious and falls outside the ambit of fair labour practice.

Most appalling is the panel finding that the complainant "does not indicate what circumstances are indicative of the alleged sexual harassment".

This is not true! Her complaint explicitly details the sexual harassment. He was in her room, which was unwelcome, he was in her bed without her consent.

Mabe who is her senior, had no business having meetings in a hotel room with the complainant and it is strange the panel overlooked these allegations and effectively cleared him.

The panel also overlooked that fact that sexual harassment is riddled with complexities such as power and coercion.

This matter proves that sexual harassment is often an abuse of institutional power because perpetrators are likely to continue their behaviour for as long as the institutions fails to act.