Without private sector SA will be a failed state, thanks to ANC 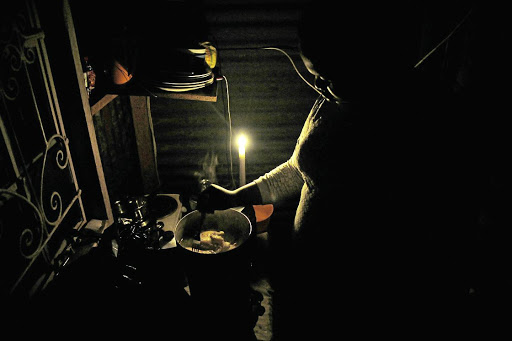 A woman prepares a meal using a primus stove by candlelight due to power cuts. The writer says the nation should look no further that the ANC's mismanagement of the entire state machinery for the genesis of problems such as power cuts, lack of safety and security and a failing education system.
Image: Veli Nhlapo

When a country is in a crisis, it is no time to tell lies. The sad truth is that the ANC has failed to govern the modern South African state. There are four areas of disastrous failures.

The first is national security. For international criminals seeking to make dirty money, SA is a nice playground.

That three Indian brothers (the Guptas) were able to infiltrate and literally take over our state shows that anything is possible under the ANC.

The evidence surfacing at the Zondo commission is further proof that the ANC has been on sale long before the Guptas captured South Africa.

Having a national defence force means absolutely nothing when foreign criminals can come in and out of a country to do as they wish. Even small states like Rwanda can enter SA to murder their political opponents in our best hotels.

As an ordinary South African, think of the unchecked food you buy from Pakistanis daily. Foreigners can poison our whole population without our so-called government knowing about it.

Is there anyone who thinks the ANC knows what is national security?

The second area of failure is health. Aaron Motsoaledi is a talented noisemaker. But the situation in our public hospitals is worsening while he continues to howl. Be honest: Do you think ANC fat cats go to township hospitals when they are sick?

A government that cannot run hospitals is not worth the name.

Cyril Ramaphosa has assured workers and the nation that the unbundling of Eskom into three entities will not result in the power utility being ...
News
3 years ago

The third lamentable failure of the ANC is public education. Every year ignorant South Africans are made to celebrate a specious rise in matric results. What you are not told is that more than half of the children in grade one do not go on to write matric exams.

Indeed, the quality of our matriculants is terrible. They cannot compete with their peers from South Korea, Singapore or Germany.

Beyond causing chaos by promising a free education its government cannot afford, the party does not even know that, currently, our "best" university, UCT, is number 200 in the QS World University Rankings. The question is: Can the ANC run education?

The fourth area of failure is energy security. A few days after his state of the nation address, President Cyril Ramaphosa had to issue an embarrassing statement feigning to be "shocked" and "angry" at Eskom.

Hardly a day later, Eskom told us it needed to conduct yet another three-month audit to know its problems. Dr Hendrik van der Bijl, the scientist who founded Eskom, must be turning in his grave.

The mess at Eskom is truly devastating. It affects all our lives. People going to work are stuck in traffic. No sane investor will pour money into a country without electricity.

The worst thing about Eskom is that the money it has borrowed from capital markets has been squandered by ANC-connected swindlers. While you and I languish in darkness, ANC criminals are busy enjoying their loot.

Truth be told: without the private sector, SA would by now be a failed state.

The middle class walk around with medical aid cards in their wallets. They take their children to private schools. They are guarded by private security in gated communities. On the other side, Bheki Cele and Robert McBride, both ANC comrades, continue to fight. For what?

Zimbabwe did not happen in one day. The millions of jobless Zimbabweans are not different from the South Africans who will lose their jobs because of Eskom.

We trusted the ANC. It has failed us.