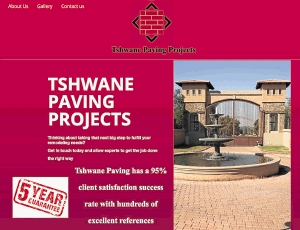 A screenshot of Tshwane Paving Projects' website. An unhappy client has accused the owner of the company of lying.

When Mpho Maela wanted to increase the value of her house, she shopped around for a reputable paving company.

She came across Tshwane Paving Projects, which promised to do a professional job, Maela said.

"Tshwane Paving claims that it has a 95% client satisfaction success rate, with hundreds of excellent references, and that convinced me to go for it," Maela said.

Johan Jonker, the owner of Tshwane Paving, gave her a R25,000 quotation in April.

She said Jonker assured her that the paving bricks would be delivered by December 14.

"He then started telling me different stories and ended up not taking my calls and WhatsApp messages," Maela said.

Maela has been requesting a refund but claims that all her pleas fell on deaf ears.

Jonker also used the service of an attorney, who also made empty promises and failed to pay the refund, Maela said.

"I want Sowetan to expose him for being unprofessional and disloyal to me as a customer," Maela said.

Jonker acknowledged that he had received a R16,000 deposit from Maela.

He said he had planned that the project would be completed before the construction industry closed for the festive season, but her money was only received two days after she deposited it, which was on December 8.

Be careful when applying for loans

Most consumers do not question dodgy communication from fraudsters and this is one of the reasons they always get scammed.
Opinion
2 years ago

"Due to stock shortage, it was impossible to deliver the service," Jonker said.

He said when he contacted Maela in January, she told him she had already got someone else to do the work.

Jonker later contradicted himself and said he could not deliver the service due to unforeseen circumstances.

He claimed that his company vehicle was involved in an accident

"Another vehicle lost its trailer and hit our company vehicle.

"Their insurance does not want to cover the costs and we are taking legal action against that company," he said.

Jonker said they had to cover all costs and that resulted in a big cash-flow problem for his company.

He said he used Maela's money to pay legal fees.

"It pains me to say it, but yes we used the money for the repairs on the vehicle that cost us a total of R35,464, excluding legal fees.

"We were hoping that this would have been resolved by now so we could get back on track," he said.

Jonker said they are a small business with only one vehicle and had no other option at that time as they needed the vehicle for service delivery.

"That's why we referred you to our attorney because he will be contacting the client to explain all details and discuss the repayment as we want to do the right thing," Jonker said.

"The deposit will be refunded and our attorney, Pieter Steenkamp from Steenkamp and Van Niekerk, will also be in touch as he handles our refunds," Jonker promised last week.