Romanticisation of struggle and poverty in schools tired narrative 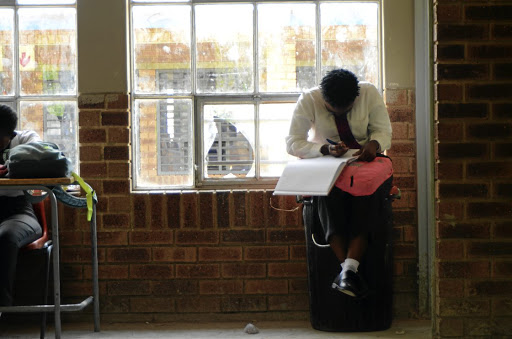 Rephafogile Secondary School in Mamelodi, east of Pretoria, kicked off the new academic year with a serious shortage of tables and chairs for pupils.
Image: Mduduzi Ndzingi

The beginning of every year is usually marked by great attention and excitement around the matric results. At this time of the year, we are flooded with stories that celebrate those who received amazing results.

The story lines that are the focus and usually stand out, are around matriculants who have received impressive results against all odds.

The stories are often to do with that matric pupil who studied all year with a candle, due to a lack of access to electricity. We read stories about matriculants who had to walk unimaginable distances in order to reach their school, but still managed to boast a high number of distinctions.

I am taking nothing away from the success of these pupils. I am, however, saying we should all reflect on the implicit romanticisation of struggle and poverty, as if studying should be that hard.

It should definitely not be that hard, especially not after 24 years of democracy. We should really be doing far better than this, considering the resources that we are putting into our education. I am not sure whether we can, with a straight face, declare that we have "arrived".

I cringe when I hear public officials celebrating a rural school for achieving a 100% pass rate while admitting that the school was one of the least resourced schools.
How can you celebrate a reflection of your lack of effectiveness?

Education must be accessible holistically; that is a child must be well fed, must have transport, emotional support and, moreover, must have every academic resource they need to excel, like lab equipment, textbooks and classrooms that aren't overcrowded.

Glorifying this against-all- odds narrative also creates the idea that those who do not succeed in these harsh conditions do so by choice when children should not have to be fighting insurmountable challenges, to access their basic right.

It is like unashamedly blaming an abused woman for staying in an abusive relationship without familiarising oneself with her conditions.

January 20 marked the fifth anniversary of the tragic death of Michael Komape, who drowned in human excrement in a dilapidated pit toilet at his school.

It is befitting to make mention of his death because these are some of the conditions that poor, and mostly black pupils have to face in order to access their basic human right - education.

We must, we can and we should do more to ensure that we undo the damage that apartheid did in our communities.

And doing so means that we can't romanticise poverty and its attendant consequences. The black child deserves better, especially from a black-led government that surely knows the ramifications of growing up black in an apartheid society.

While it is important to point at these failures, one has to point out the role that all of us must play in ensuring that we do get the best out of our education system, as black people in particular.

We need to begin by actively participating in the education of our children. Something as simple as joining your child's school governing body can lead to you intimately interacting with the school, its systems and thereby giving you power to challenge government on its inadequacies.

I want to make a call to fathers, especially, to play an even more pronounced role. Fathers also need to begin showing up.

For instance, how do we explain what happened at Menzi High School in Tsakane, where thugs ransacked the school and stole all the newly installed equipment?

For heaven's sake, no one can tell me that no one in the area heard or saw anything.

If we, as black parents, fold our arms, stand back and do not take ownership of the schools our children attend, the thugs will continue wreaking havoc in our schools and taking us backwards.