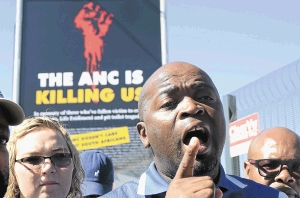 The DA's premier candidate Solly Msimanga at the hosting of a billboard bearing the names of the victims of Marikana and Life Esidimeni tragedies, which the party blames on the ANC.
Image: Mduduzi Ndzingi

The DA has stoked controversy with its "the ANC is killing us" campaign billboard.

As has been the trend in past elections, the DA's strategy is to elevate its virtue and potential by highlighting the failings of the ANC.

If executed well, it is a solid campaign strategy for the official opposition party as it energises its base, agitates its opponent's base, while making a compelling case that just might sway the undecided voter.

By contrasting itself with the governing party, it hopes to appeal to voters growing increasingly disillusioned with the status quo.

But the DA has managed to turn what should have been a simple but effective campaign strategy into a contentious matter that distracts from its core message to the voter.

In a context where the ANC has had to concede its governance blunders and penchant for tolerating the unethical conduct of some of its senior leaders and public officials, there is much ammunition available to the DA to launch its attack.

The party has had many victories against the outgoing ANC administration.

Most notably, the DA can be credited for the precedent-setting judgments that affirmed the powers of the public protector and the president's obligation to uphold, respect and defend the constitution after challenging parliament's and the executives handling of the public protector's report on security upgrades at former president Jacob Zuma's private residence.

The DA painstakingly pursued court matters to reinstate corruption charges against the former president and was successful.

What better occasion does the party have than in this most contested election period to construct a narrative to tug on the malleable strings of the voter's sensibilities.

By focusing on its victories it could have intelligently portrayed itself as a valiant defender of good governance, having triumphed against those who undermined the values that underpin our constitutional democracy.

Instead, the DA has opted for cheap political point scoring. The Marikana massacre and Life Esidimeni represent the darkest period in the country's short democratic history.

They are incidents that never should have taken place in the era of a human rights-based system of government that affirms the equality, dignity and freedoms of all.

They are indeed a blight on the record of the oldest liberation movement on the continent that prides itself with achieving the settlement that spelt the death of apartheid and the birth of a new South Africa.

But these tragedies are not merely a matter of politics and the epitome of bad governance. To treat them as such is to reduce the victims to numbers and to deny their value as human beings. And this is what the billboard does.

Despite the DA's contention that it pays homage to those individuals who lost their lives at the hands of an uncaring ANC government, the billboard has achieved the opposite.

To associate the names of the victims in a campaign message that seeks to get one over the ANC is the ultimate insult to their memory and the pain of bereavement of those who survive them.

The DA has reduced the tragedies to a political tool with which to beat down the ANC and to elevate itself.

The DA's appropriation of the deaths and the grief to make a political statement is offensive especially because these are not matters of administrative justice.

At the heart of what happened at Marikana and Life Esidimeni are core policy debates about how to achieve a just society and to address inequality.

The DA's strong commitment to the notion of an equal opportunity society to an extent makes it blind to the fact that the challenges in public health are not solely owing to mismanagement but to a two-tier system that advantages the haves over the have-nots.

What should have been a foolproof campaign strategy to present itself as a credible alternative has been undermined by the resort to cheap publicity stunts and political gimmickry.