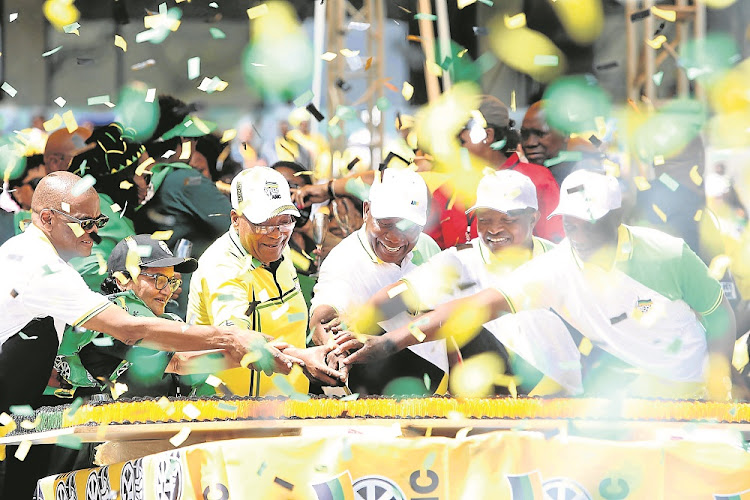 Happy New Year everybody! Vera hopes 2019 treats you better than our long-suffering brothers and sisters in Zimbabwe who may now have to trade-in their cars for bicycles and donkeys because a litre of petrol there now almost guzzles one's entire rent money.

Vera heard a lot of people complaining about not being able "to Dezember" this past festive season because of "our President Ramanyusa". Count your blessings people, across the Limpopo they have a Crocodile for a president who just doubles the price of petrol and then flies out to chill overseas for two weeks.

Anyway, Vera did have a great start to the year - with the big bash down in Durban where abochief; tenderpreneurs; the blessers; iceboys and Slay Queens were "honouring" the Founding Fathers by drowning themselves in the Queen's Tears ko eYadini and the overpriced shebeens of Florida.

Like a good cadre, Vera did attend the 2017 ANC conference. But she seems to have missed the memo that all comrades shall henceforth advance the National Democratic Revolution by driving around in top-of-the-range Mercedes Benz Vianos. Those vehicles were all over eThekwini last week.

Presidency is not forever, JZ

While ANC left Durban overjoyed over the success of the birthday rally, it would seem that one not-so-ordinary member was fuming.

In fact, he was so angry that a few days later he had to use his private propaganda arm Africa News 24-7 to register his unhappiness. The member in question is one JG Zuma who told the on-line rag how he was made to sit in a waiting room separate from that used by President Cyril Ramaphosa and other top six officials before the start of a gala dinner.

"Even after the singing of the anthem nobody came to fetch us ... We then decided to walk to the venue on own own."

Baba was also not happy with Fikile Mbalula, the MC, failed to acknowledge his presence at the dinner. When the Presidency is gone, it's tough getting people to remember you Msholozi.

Or you can go queue at the ATM

Perhaps it is a good thing then that some of Baba's staunch supporters have set up heir own little mkhukhus as political parties.

If Luthuli House big wigs continue to ignore him, he can just go queue at Mzwanele Manyi's ATM for membership. After all, Manyi did say this week that ATM "is actually bigger than the ANC".

Future too Cloudy to predict

If ATM is too Eastern Cape for him, Baba can try his favourite broadcaster Hlaudi Motsoeneng's African Content Movement.

But he would have to be careful, the Intellectual Lecture is already showing signs of dictatorship.

"In my party democracy is limited mchana," he told a reporter, "Everyone can come with their views, but if I don't believe those views ... I say no."

Oh, before Vera forgets, did you guys see that woman who led the prayers before the start of the ANC rally, one pastor AT Maphalala? Leave what she said in the prayer about there being three heavens and the Prez having allegedly been "elected" by the Son. When she knelt before the Prez and ploughed her head between his thighs, was she looking for cupcakes?