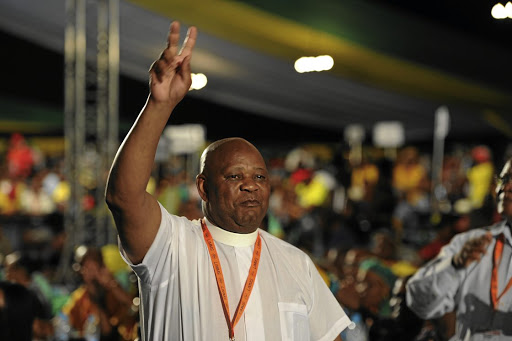 The writer says ANC chaplain Dr Vukile Mehana's understanding of what the Bible teaches us is archaic and medieval and belongs in the Stone Age.
Image: Felix Dlangamandla/ Gallo Images

Is Dr Vukile Mehana, the ANC chaplain-general, an aberration or the norm? His vitriol against women priests is not what the majority of us talk about almost every day in our secure, private spaces.

I am grappling with these questions because I really want to understand why we are so uptight after hearing what Mehana said, when in fact sexist jokes are part and parcel of the so-called men's talk.

And many of us see nothing wrong with these demeaning jokes or utterances, in fact we laugh at them and encourage each other as if they were a badge of honour.

Robin Diangelo, in her book White Fragility, says "the identities of those sitting at the tables of power in this country have remained remarkably similar - white, male, middle and upper class, able-bodied.

She goes on to say that "acknowledging this fact may be dismissed as political correctness but it is still a fact. The decisions made at those tables affect the lives of those not at the tables".

"Exclusion by those at the table does not depend on wilful intent, we don't have to intend to exclude for the result of our actions to be exclusion."

Diangelo goes on to say that "while implicit bias is always at play because all humans have bias, inequity can occur simply through homogeneity; If I am not aware of the barriers you face, then I won't see them, much less motivated to remove them. Nor will I be motivated to remove the barriers if they provide an advantage to which I feel entitled".

I find the above apt in putting into sharp focus what sexism, entitlement, patriarchy and toxic masculinities are all about.

Reverend Mehana, it is near-impossible to appreciate what sexism is all about until and unless you face it head- on. It is the training curricula at different biblical schools which is responsible for producing the likes of you.

It is not accidental that he calls gender equality and patriarchy as "that rubbish". If we are to deal with the deep-seated sexist teachings of the Mehanas of this world, we would have to go back to how the majority of world faiths regard women.

So I want to argue that Mehana is not an aberration, he represents our society, a society that is largely sexist and patriarchal.

Like beneficiaries of racism, men deprive and exploit women then bizarrely blame them for their plight.
Opinion
3 years ago

Reverend Sduduzo Blose of the Seventh Adventist Church says "as an African theologian and a liberation hermeneutician, I must express my dismay at Mehana's choice to appropriate the title of African theologian to buttress and give some semblance of credibility to his toxic views on women.

"In doing this, Mehana runs the risk of pathologising African theology as a bastion of toxic masculinities and misogynistic views".

Blose goes on to say that "African theology must be redeemed from this toxic association. It is not a secret that African theology is a product of and contributor to liberation and black theology. These liberation theologies gave impetus to the Liberation Struggle through their responsible and contextualised Bible readings."

I could not agree more with these sentiments, as they encapsulate what most of us believed in during the dark days of apartheid. A lot of us used the Bible as a tool to be used in our fight against the obnoxious system of apartheid.

We looked up to theologians such as Father Buti Tlhagale, Manas Buthelezi, Archbishop Emeritus Desmond Tutu, Allan Boesak, Beyers Naudé ... the list goes on and on. It is these men in the main who made us to understand that God was on the side of the oppressed and not the toxicity found in Mehana's vitriol.

Reverend Mehana, we are in 2019 and not in 1919. Your reading and understanding of what the Bible teaches us is in fact archaic and medieval and belongs in the Stone Age. It has no place in our society. We serve a liberation God who is non-sexist and promotes equality.

I hope you will be able to look at how Christ related to women in his ministry while on earth. Sexism is an antithesis of all that Christ died for on Calvary.