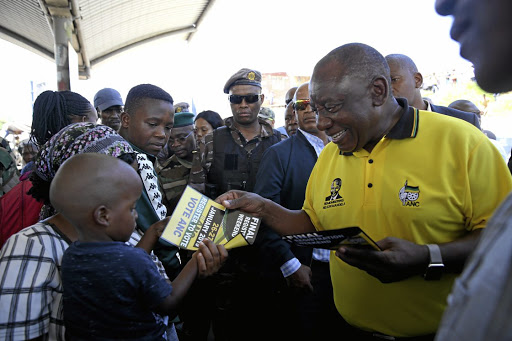 President Cyril Ramaphosa says that through the Thuma Mina campaign, the ANC has reached out to communities. The writer says that what matters is if the party will respond.
Image: THULI DLAMINI

In his January 8 statement commemorating the ANC's 107th anniversary, President Cyril Ramaphosa reiterated his message of a party and a country undergoing renewal.

"As we mark the second January 8th celebration ., we can declare with confidence that both the ANC and the country have entered an era of renewal."

The question is whether this renewal will be reflected in the party's election manifesto to be launched at the weekend. He said the renewal is based on a two-pronged strategy.

One is cleaning up, ridding the party and state of unethical comrades who have brought the ANC into disrepute.

The other is taking the party to the people through the Thuma Mina campaign.

". we have more intensely reached out to communities, demonstrating the ANC's commitment to improving people's lives.

"[We] have worked hard to ensure greater consultation and engagement . on issues that affect their lives."

Although busting corruption and getting rid of unsavoury elements is a matter of grave importance requiring urgency, it is the second part of the strategy that demonstrates that the ANC is awake to the greatest threat to its continued dominance. The ANC has over the past two decades grown distant from its base.

It is, however, not enough that it has begun to reach out to the people on the ground to undertake a listening exercise. What matters is whether it will be responsive.

This is what all, critical thinking citizens should be asking as they scrutinise its manifesto, and those of other parties contesting the upcoming elections.

Firing those bust in corruption without criminal charges may not convince voters that change is imminent.
Opinion
3 years ago

The ANC acknowledges that there is demonstrable disillusionment about the slow pace of transformation.

SA remains a socially disparate and economically unequal society. Political equality and legal citizenship has not yielded the material benefits many anticipated.

The argument has been strongly forwarded in the debate over land expropriation without compensation.

But the cause should be located in the failure of political parties to adopt strategies to respond to structural problems.

Winning elections and promoting party interests has taken precedence over the long-term imperative to transform society.

The discontent with the status quo and slow pace of transformation has expressed itself, on the one hand, in the resurgence of grassroots advocacy for improved healthcare, free and better quality education, housing and land rights, and anti-corruption.

On the other hand, disillusionment has led to the exponential rise in protests indicative of the crisis of local government. These instances of active citizenry reflect a growing consciousness among citizens of the need to participate in political processes.

It reflects the challenge of modern democracies, which Bernard Crick describes eloquently, ". modern democracies seem to demand the good citizen more than the active citizen: the relatively smooth working . of democratic institutions can actually smother an active democratic spirit by appearing to diminish its need."

This year's general elections is a test to see whether SA's political elite will reaffirm active citizenship with proposals responsive to community demands or would smother it by dishing out more of the same empty rhetoric.