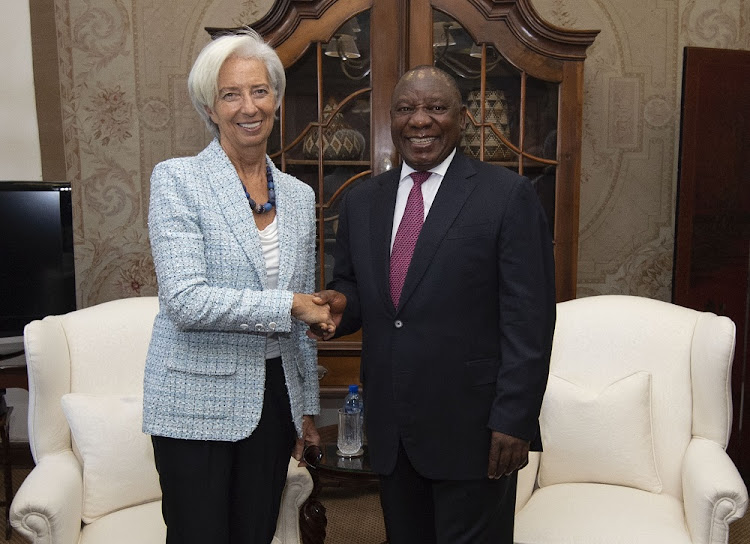 Yet the people of this country and their so-called leftist organisations such as the newly formed Socialist Revolutionary Workers Party (SRWP), led by Irvin Jim, see nothing wrong with this visit.

In countries where there are truly socialist political parties there would be massive demonstrations against Lagarde's visit.

Therefore, there are no socialist parties in SA but only quacks and impostors, that is why this country is in big trouble.

The less said about the media the better. We know the media shapes a people's culture. But if you listen to the radio or watch television, there won't be any critical commentary of the IMF chief's visit to this country because the radio and television presenters are also ignorant of the shameful role the IMF and World Bank play, not only on the African continent, but throughout the developing world.

The IMF and the World Bank meddle in the economic and political affairs of many countries and dictate which development models they should adopt.

If your country hosts visitors from the IMF or World Bank, you must know that you are in big trouble. They are robbers who line their pockets.

Lagarde is in town because the ANC government killed the goose that laid the golden eggs. Is it not interesting that the ANC government is a hangers-on and riding on the coat tails of the IMF and World Bank yet Muammar Gaddafi had completely done away with that dependency?

IMF has warned that South Africa’s prospects remain uncertain in the lead up to the 2019 elections.
Business
3 years ago

Yet the ANC government presided over the overthrow and assassination of the Libyan leader.

Gaddafi funded many African countries and reduced their dependence on the West and their financial institutions such as the IMF and World Bank which have a bad reputation in the developing world through their loans that have so many strings attached.

The ANC government is firmly in the grip of these notorious Bretton Woods institutions.

If we are truly a democratic country then you must demand transparency and accountability from Kganyago and Ramaphosa.

Representatives from opposition political parties, progressive social movements and civil society need to be represented in such meetings between Lagarde, Kganyago and Ramaphosa.

Affairs of the state cannot be run on the basis of secrecy. We say no to borrowing money from the IMF or World Bank. No to privatisation of state-owned enterprises. No to agreement on trade liberalisation. No to agreement by the Reserve Bank to devalue the rand.

In fact, Lagarde should not have been allowed to come to this country.

If the IMF and World Bank enter into secret loan agreements with the ANC government, then they must know that it is not binding on a different government that may take over from the ANC.

But why would a country such as SA, endowed with mineral and other natural resources, go with a begging bowl to financial entities such as the IMF and World Bank?

The ANC under Nelson Mandela secretly agreed to inherit and pay off an odious debt left by the apartheid regime, which placed a heavy burden on the country to this day. Such shady deals must not be allowed anymore. The ANC government must play open cards.

We must insist on our right to self-determination. Entangling the country into an inextricable debt trap is not the way to go.

Ditshego is an independent researcher