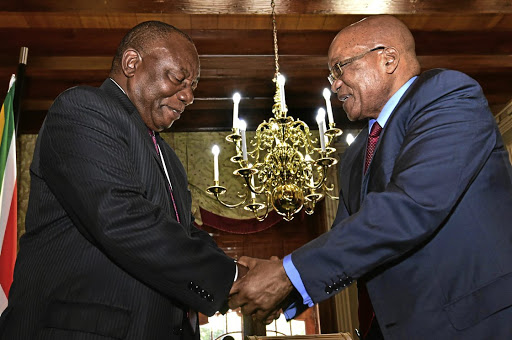 President Cyril Ramaphosa and his predecessor Jacob Zuma are seen by sections of the electorate as representing the same mentality about the current leadership in the ANC.
Image: GCIS

As the ANC in the North West and Limpopo have acted decisively in sacking mayors linked to the looting of VBS Bank, it would seem the party is firmly committed to entrenching accountability.

Add to that, the national working committee's instruction to Qedani Mahlangu and Brian Hlongwa - both culpable in the Life Esidimeni tragedy - to resign from the Gauteng provincial executive committee, signals a wave of change sweeping through the governing party.

This could yet be the self-correction that the party faithful, such as the party veterans, who stood up against former President Jacob Zuma, have been calling for.

The ANC should be given credit for this new trend of enforcing accountability that has also seen ministers such as former finance minister Nhlanhla Nene and former home affairs minister Malusi Gigaba resigning.

The party can now surely claim that it is living up to the promise of a "new dawn" under Cyril Ramaphosa.

This marks sharp contrast from the principle of collective responsibility which the ANC's leadership used to justify its inaction against its former president Jacob Zuma, at the height of his scandals.

Court orders Jacob Zuma to pay his own legal fees

Former president Jacob Zuma will have to foot the bill for his own legal costs‚ not the state‚ the North Gauteng high court ruled on Thursday.
News
3 years ago

Following its poor showing at the 2016 local government elections, the national executive committee resolved to take collective responsibility for losses.

This was primarily in reference to the party's handling of public protector's findings over security upgrades at Zuma's private residence in Nkandla.

In electing not to act against Zuma after his decision to fire Nene in 2016, costing the economy billions, and being found by the public protector to have given the Gupta family inordinate influence over himself and state entities, the ANC upheld its stance on collective responsibility.

However, the political consequences now being meted out on individual party deployees, cannot absolve the leadership that stood by while the rot in the party and state took hold.

Ramaphosa, then deputy president of the ANC and country, remained silent, only to speak out when campaigning for ANC presidency. He, like many others including cabinet ministers and NEC members consented with the capture of the state and the party in the hope of rising up as the heroes to save the day.

But as the principle of collective responsibility would have it, the entire party is tainted by the sins of the individual office bearers who have been booted out.

Leaders of the ANC and its alliance partners have told public enterprises minister Pravin Gordhan to immediately end load-shedding.
News
3 years ago

Although the ANC under Ramaphosa is at pains to disassociate itself from the ramifications of the Zuma years, the distance between the two is very narrow.

Ramaphosa and others that chose silence rather than risk being fired could have calculated that they stood a better chance of bringing about change from within than from the outside.

They still harbour the hope that they can return the party to the height of its greatness and integrity.

To do this though, the party needs to move beyond political consequences for fraudulent, corrupt and criminal conduct. The party must lay charges against its own and refrain from political interference in law enforcement agencies as has been the trend in the past two decades.

If it doesn't, then it's enforcement of individual accountability is nothing less than an electioneering strategy for the party to retake power in the 2019 elections.