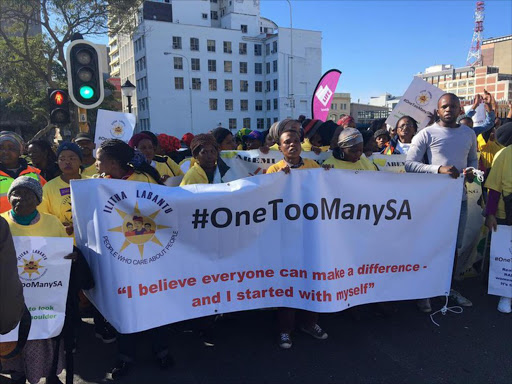 FILE IMAGE: Thousands have signed the pledge to end abuse of women and children.
Image: SUPPLIED

The day Mapaseka Ndlovu interviewed Babes Wodumo on MetroFM and openly spoke about her abuse, I knew that regardless of what society might think of me, one day I will write this column.

When a friend invited me to Thailand early this year I did not even blink an eye and immediately agreed to go much as I had been there a few years back.

I had traveled alone and knew that I wanted to go back with a group of friends.

As some of the friends cancelled the last minute I then invited other friends from another group and a lady I had met through a friend (a woman who was later involved in a sex scandal this year) decided to be a part of the trip.

The lady was very soft spoken and sweet, little did I know the trauma and roller coaster this “sweet” package was wrapped in.

This gave us an opportunity to have ample time to discuss our lives and everything that came with it. By the second night after a few drinks she broke down in the most unimaginable way and for someone I hardly knew I did not know what to do and how to console her.

After much convincing  she opened up about the abuse she suffered at the hands of a family member as a child that her mother normalised and made her keep it a secret to date, all in the name of saving her marriage and keeping the family together.

Not only did she go through this, she is now currently married to a man who got terribly sick four years ago as they were living apart due to work reasons and lying on his death bed not wanting to disclose what he was dying from she Googled the medication she went and collected for him at a pharmacy as the medical aid is in her name and this is how she discovered what the husband was dying from.

He was in a hospital bed for over a year and was so embarrassed over his disease or ailment he swore her into secrecy in exchange for material things. The first one been a fancy car.

This woman wept so badly and disclosed that she has not had sex with her husband ever since he was bedridden as she could not get over the betrayal of what he has done to her.

Most of our families and the church are the reason so many victims of abuse are lying in graves. Upon asking this woman why she’s subjecting herself to so much pain and abuse, her response was she was from a  born-again Christian family.

She said it would  be a sin and unacceptable to her family for her to even bring up the word divorce.

How long are we going to be silent about pastors like Timothy Omotoso, who is on trial for rape and human trafficking?
Opinion
3 years ago

She said on her wedding day her father made it very clear to her that “Lebitla la mosadi ke bogadi”, meaning a woman should stay in   her marriage, no matter what.

Not only that, her family worshipped the husband as they believed she married well  compared to her sisters and  the family was paid more ilobolo.

At this stage what this woman didn’t disclose is she was hiding that she has a sex scandal with a man who would entertain her every night as she slept in separate bedrooms with the husband and in exchange she would send him money.

As we were on holiday she would secretively take this unholy night calls and one of the nights she broke down and disclosed everything although at the time she did not admit that she had been paying this guy. This man was mad as hell as at this stage she was beginning to put him on a speaker phone and I could hear all their conversations and at this stage she flatly refused to have phone sex with him as it was a norm between them.

She became very defiant as she did not believe that there was a video and told this man who was now blackmailing her to go to the nearest hell and burn and to her surprise a week later the man – true to his word – sent a video and demanded $10 000.

At this stage she was so terrified that she was raising money and asking for financial assistance to pay this man to stop him from exposing the video.

This did not make sense to me as this man was already used to her giving him money and he was going to continue making ridiculous demands so I suggested she tells her husband.

So this woman was stuck in a marriage to avoid embarrassing her family that care so much about what people will say and because they cannot defy the rules and regulations of the church and protect some abuse family secrets.

After spending almost a month in a psychiatric ward, with her controlling mother and family and a sick husband that they still insisted she stays with now even more than ever because of her sex scandal her condition just worsened.

Women have always organised against rampant physical and sexual abuse which is common in many cultures across the world. One of the recent global ...
Opinion
3 years ago

When she came out society was never the way she left it before her sex scandal was exposed. Some friends turned their backs on her. As if this was enough her own siblings, especially the two sisters, ganged up against her because of her life choices and decision to finally leave the sick husband and start a new life in Johannesburg, another episode I will soon write about.

After all of this happened to her, she went for a complete image change and disguised her short hair that she was exposed with in the sex scandal with different types of fancy weaves and took a chance and went to a popular franchise night club all by herself. She did not even last 10 minutes in the club and all the men were all over her, demanding sexual favours and pictures.

After her suicide attempt she moved in with one of the sisters and the mother came from the village to assist with her healing process. And all this involved prayer and getting rid of demons that made her to want to leave her marriage.

Upon departure back to the village, the Mother took her back to the very same sick husband  and the mother told her she should have been told about the husband’s ailment a long time ago as her “God” would have long healed him.

I remember this like it happened yesterday as I was visiting a friends house for dinner when the woman called me weeping and threatening to commit suicide as her mother had forcefully taken her back to her marital home.

Lest I forget that after our Thailand trip this woman went with the husband to church for a full two weeks having parted with thousands of rands as he was attending the healing school of which a few weeks later he claimed to be healed and encouraged her that they can engage sexually and move on with their lives normally.

As we celebrate 16 Days of Activism it really hit me hard that we are always finding fault at things that are very far fetched when we should be looking at ourselves, our very own families and churches as that’s where the abuse starts.

Our very own mothers and families are selling their own kids to their husbands to keep their marriages and are taking their children to church to be obedient and they are practically killing their own children as they encourage the culture of dying in silence.

My heart always goes out to this woman who ended up with a sex scandal that she has to deal with for as long as she lives because she was damaged by her very own family, a selfish husband and a blind belief in a church.

All I know is this woman’s journey has left me with deep emotional scars. So deep I’m not sure if there’s any level of counseling that will make me recover. The worst thing is that what I call trauma, seems to be a norm to her as she’s not faded by any of this and this has made me question if indeed bad things happen to good people or if our circumstances are a reflection of who we are!