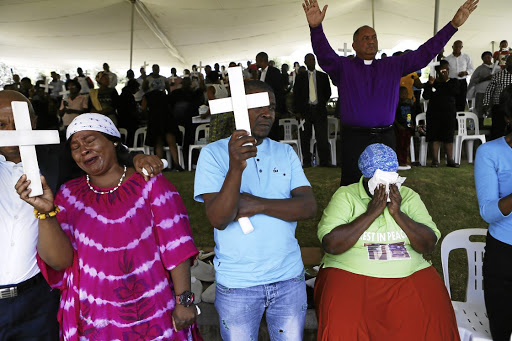 A life of tragedy is the hallmark of public life in SA, as seen by the big story about family members crying for relatives who died in the Life Esidimeni fiasco by Gauteng government, notes the writer. / Phill Magakoe

In 1991 I found myself working and living in Toronto, Canada, a beautiful country which offered me respite from the political violence I had fled in my native city of Durban.

A few weeks into the job at that country's biggest newspaper, the Toronto Star, where I worked as a city reporter, I suddenly realised that there was something wrong with my job. The pay was good, and so were the hours. So what was wrong?

The stories I was covering were so ordinary, so boring. I recall that one of the stories I covered related to an award ceremony where animals including dogs, cats and horses were being honoured for their service to man.

The animal that took the award was a dog which had saved its owner from death. The man's house had caught fire and in trying to put it out, he fainted after inhaling too much smoke. His dog then sank its teeth into his pants and dragged him out of the burning house. Then it started barking, running up and down the street.

Irritated by this dog which they thought had gone crazy, neighbours got out of their houses. It was only then that they saw the house on fire. They phoned the local fire fighting department.

When I told this story to a friend, he said: "Bloody boring country. They have no real news stories, hence those stories about dogs."

If you live in a normal country, where there is order and stability, where levels of poverty are low or even non-existent, that is the kind of story you will see in your newspaper or on your TV.

I was reminded of my Canadian sojourn by a story currently dominating front pages of newspapers in Holland. It relates to a 69-year-old businessman whose doctors say he has the body of a 45-year-old person.

Buoyed by his doctors' information, Emile Ratelband wants his local authority to change his age on official documents - but they have refused. Now he is suing.

It's a huge story in that country, a talking point that's got legal gurus scratching their heads and newspaper editors stirring the pot.

Ratelband says changing his age would improve prospects in his love life and also on the business front. In SA, we will laugh at this story and reduce it to a filler on a page, or run it where we put jokes on our newspapers.

To us this is a non-issue. This is because we are not yet a normal society. We are grappling with heavy abnormal issues. Our newspapers lead with such abnormalities as children falling into pit latrines and drowning in poo. We write about four-year-old children getting raped.

We are dealing with such abnormalities as people getting killed and their body parts harvested for muthi.

We are dealing with the abnormality of 57 people getting murdered every day.

Sadly, we sometimes think these abnormalities are a norm. I hope and pray that one day we become a normal country where children can ask strangers for directions, where newspapers will lead their front pages with stories about cute dogs and cats or even donkeys that save human lives.