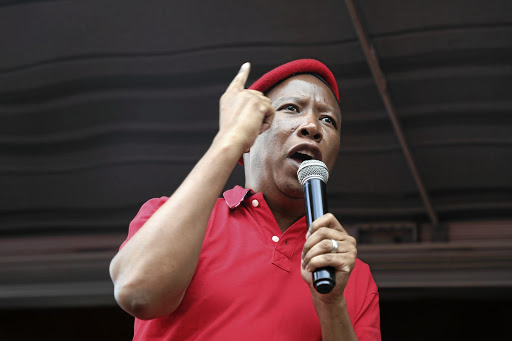 For the entirety of former president Jacob Zuma's second term in office, the EFF waged a campaign of disruption to unsettle him, with the ultimate intent to unseat him.

It is curious that instead of encouraging a thorough engagement with what Gordhan has to say at the Zondo commission, the EFF is working to completely divert attention away from it.

At every appearance Zuma made in parliament the EFF were constant in dredging up accounts of his malfeasance.

Their parliamentary antics ensured the party kept trending and consistently grabbed the headlines, allowing the EFF to drive the narrative on the rot within the state and the ANC.

The strategy held them in good stead.

Now that Zuma is out of the picture, the EFF has turned its attention to new targets. Currently, their campaign is to discredit Gordhan.

His testimony is set to be comprehensive in detailing the modus operandi of the Zuma/Gupta attempted takeover of the state. But the EFF would rather amplify an alleged "misrepresentation" by the minister.

The aim is to ensure he goes the way of Nhlanhla Nene who tripped and fell over his own contradictions.

Conscientious citizens should reflect critically on this latest antic.

It was Gordhan in 2016 who went out on a limb to confirm the suspicions and allegations of the Guptas' nefarious dealings when he exposed in an affidavit submitted to the high court in Pretoria that the Financial Intelligence Centre was at the time investigating about R7bn worth of suspicious transactions in the Guptas' bank account.

At the time the Gupta-owned businesses were putting pressure on Gordhan as finance minister to compel SAs four major banks to reopen their bank accounts after closing them on account of a risk to their reputations. The EFF praised Gordhan, calling on SA to back him.

Shortly after that, Gordhan faced charges of fraud brought against him by the National Prosecuting Authority (NPA) in relation to his approval of early retirement to former SA Revenue Service deputy commissioner Ivan Pillay.

Malema characterised this move by the NPA as Zuma fighting back.

By appearing before the Zondo commission, Gordhan has an opportunity to detail what he knew then and whatever else he did not divulge as to the extent of state capture.

It is disingenuous for the EFF that prides itself for raising the alarm on the Guptas' improper relationship with the former president and state entities to now want to distract from the very testimony that stands to provide greater clarity on that very matter.

But it should come as no surprise. For the EFF, this is just part of an ongoing campaign to dislodge the ANC and open the path for its ascendency.

On the road to 2019, seeing Gordhan fall on his sword is more politically expedient for the EFF than to have him provide a concrete account of how SA was almost completely stolen.

There is no altruism in the EFF's calls for accountability and for the exposure of corruption in ANC ranks - both in the party and government. And there never has been.