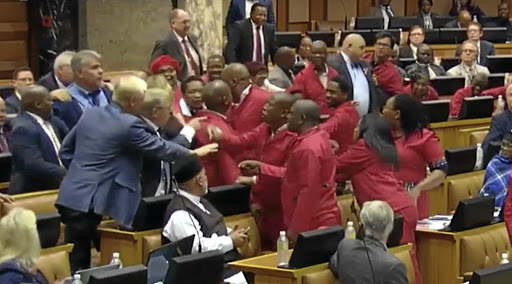 The EFF and DA scuffle at President Cyril Ramaphosa's question and answer session in parliament on Tuesday.

But this time rather than rail against President Cyril Ramaphosa, opposition parties turned on each other.

Ramaphosa's short time in office has shifted the balance in parliament and is restoring the dignity of the office of the president.

During Zuma's tumultuous second term, the opposition could hardly stomach his obfuscations and denials of culpability in the pillaging of the state. Shouts of "pay back the money" became the new normal, often leading to the removal of EFF members from the House.

The DA, not to be upstaged, had a retort for every audacious utterance coming from the podium during Zuma's question and answer sessions.

The ANC benches were also very lively, meeting accusations against their president with insults and pledges to defend him.

Such had Zuma's respectability and credibility declined that his presence fomented an unlikely alliance between the DA and EFF.

But the glue that bound the opposition together, that of having a common target - a compromised, scandal-prone Zuma - has lost its effect.

And now that Zuma's out of the picture, the opposition has lost its rallying point.

DA chief whip John Steenhuisen raised temperatures in the house on Tuesday when he referred to the EFF as "VBS looters" prompting the jarring retaliatory response of "racist white boy" from EFF leader Julius Malema.

Appropriating the EFFs signature chant against Zuma, the DA demanded that the EFF pay back the money - referring to Floyd Shivambu's alleged benefit from the VBS looting through his brother.

Although hardly perfect and still having a lot to prove in terms of his commitment to ridding his own cabinet of rotten elements, Ramaphosa's approach of facing the country's crises head on and staying out of the fray has placed him on a firm footing.

He has busied himself with finding solutions to the poor performance of the economy, he has been decisive on state-owned enterprises.

Recent summits on jobs and gender-based violence present him as a president who is in touch with society and willing to get his hands dirty in tackling challenges.

He is also on track on his commitment to raising $100bn in investment in the economy, having recently held a successful investor conference, the first of its kind in South Africa.

All this has made it difficult for the opposition to develop a counter strategy.

The ANC is far from redeeming itself over the decline of government and governance and its ethical lapses that has cost the country dearly, even reversing gains in poverty alleviation and transformation.

With the 2019 elections a few months off, the Ramaphosa factor is playing to the ANC's advantage.

The events in parliament demonstrated that internal challenges in both the DA and EFF and their own crises of credibility mean they are scrambling to turn the focus back more squarely onto the ANC's record of failures.

The DA's attempt to throw some mud on Ramaphosa and to associate him and his family with the sort of nefarious deals that saw Zuma aggrandise himself and his family did not stick.

Asked about his son's payment of R500000 from Bosasa, a company that has scored billions in state contracts, Ramaphosa did not furnish denials, defences nor obfuscate, as was his predecessor's custom.

He took the nation into his confidence saying he had confronted his son who then presented evidence that his dealings were bona fide.

He went a step further to say that if his son or any other family member were implicated in wrongdoing and corruption, he would take them to the police himself.

It is this quality of being able to use what the opposition had meant to be a trap as an opportunity to demonstrate a commitment to transparency and accountability that makes Ramaphosa the magic ingredient in the ANC's most difficult appeal yet for the electorate to give the party another chance.

And it is this quality that could make Ramaphosa the EFF and DA's undoing.