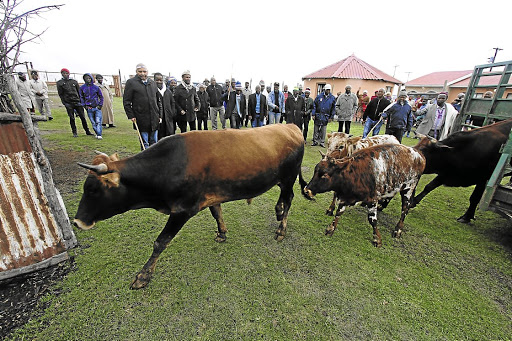 Elders from both families bear witness by inspecting and appreciating the delivery of a head of cattle as a bride price to conclude the ilobolo process.
Image: LULAMILE FENI

The practice of paying ilobolo is an intrinsic part of getting married for many South Africans. But, is it a tradition or a legal process?

It's important for South Africans to understand the difference between ilobolo and a legal marriage. A legal marriage protects your rights, particularly your property rights, if the marriage fails or in the event of death.

Ilobolo is not marriage, but rather a part of the process of getting married under customary law.

This law clearly stipulates that in order for the customary marriage to be legally recognised, it has to be entered into by a man and woman over the age of 18 who have the intention of getting married under customary law. (In SA, couples of the same gender are allowed to marry under the Civil Union Act of 2006.)

In terms of customary law, there must be a marriage celebration after the conclusion of the ilobolo negotiations.

By merely paying or receiving ilobolo in full without following it up with the requisite celebration, the marriage is not concluded in compliance with customary law, and therefore considered invalid. The ilobolo letter alone may not be sufficient to prove that a customary marriage existed.

The way in which a customary marriage is celebrated differs from culture to culture. Most cultures welcome or incorporate the bride (makoti) into their family by song and dance, slaughter of a beast and the exchange of gifts such as blankets, utensils and cutlery.

When the legality of the marriage is disputed, the courts have to evaluate each case on its own merit, guided by the prevailing customs and practices of the particular jurisdiction.

ANC man dies on his way to pay lobola

An ANC member died in a car crash on Friday night while on his way to pay lobola for his girlfriend.
News
3 years ago

Many couples tend to take a break after the ilobolo process is concluded to save money for a celebration without realising how crucial it is for a traditional ceremony to take place as soon as possible.

If the ceremony is not conducted, and the marriage is not registered, the marriage may be hard to prove and may not be recognised under the Recognition of Customary Marriages Act. This means you may stand to lose your claim on any assets you may be entitled to if the marriage fails or if your spouse dies.

If you don't register the customary marriage with home affairs, it does not necessarily mean your marriage is invalid, but it makes it harder to prove.

You will have to approach the high court to apply for a declaratory order to legally confirm that you were indeed married under customary law.

The judge would then exercise their own discretion in deciding whether to declare the two of you as married.

In such cases, the courts may also be guided by custom experts who understand the laws of different cultures.

The courts may also need affidavits from family members stating what actually happened. Additional evidence, such as photos of the celebration could also be helpful.

In effect, a customary law marriage amounts to an in community of property marriage, in which the couple jointly own the assets and liabilities of the joint estate. A legally recognised marriage therefore protects your rights if the marriage ends.

She attends the same church, the St John's Apostolic Church of Prophecy, with her husband, who is also a pastor.
Lifestyle
3 years ago
Next Article