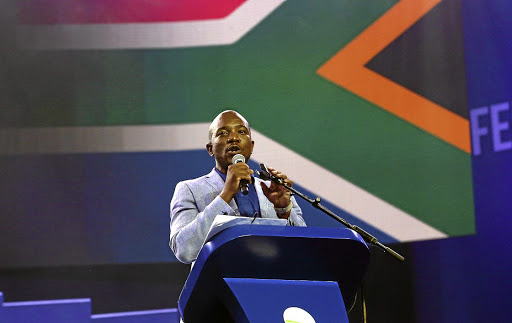 Mmusi Maimane's party commands the second-biggest support base in SA and that alone should make him one of the most important political figures in the country, says the writer.
Image: Masi Losi

In reality - at least as things stand right now - choices for voters ahead of next year's elections boil down to three men.

There may be those in his party wishing that President Cyril Ramaphosa will not be the face of the governing ANC's campaign but surely even in the dark corners of Durban's Maharani Hotel there is acceptance among the self-styled Jacobins that they'll be singing "Nayi le Walk in support of the Thuma Mina march.

As for the EFF? It is not even a question that its leader Julius Malema will be at the forefront of the party's bid to grow its modest national support base to one that can sufficiently back its loud voice in our society.

It is, however, the third man that this column is concerned with - Mmusi Maimane, the leader of the DA.

Maimane U-turn good for the DA

Sanity has finally prevailed in the DA with its leader Mmusi Maimane abandoning his ill-conceived bid to stand for the premiership of Western Cape in ...
Opinion
3 years ago

As an individual, Maimane is clearly not as famous as Ramaphosa or as charismatic as Malema, but his political party commands the second-biggest support base in the country. That alone should make him one of the most important political figures in the country.

It has been over three years since he made history by becoming the first black person to be elected leader of this historically white political party.

His election in May 2015 was followed by a long honeymoon period that was made even easier by the fact that his main political opponent was a scandal-prone Jacob Zuma, the then president of the country and the ANC.

With Msholozi now relegated to holding "clandestine" hotel meetings on the Durban beach front, Maimane finds himself faced with a much tougher opponent in Ramaphosa.

It is a real test of his political mettle, and so far he is failing.

Instead of capitalising on the aftermath of a bruising ANC leadership battle by consolidating the DA's support base and presenting the party as unified in the face of ANC chaos, Maimane has spent much of this year presiding over one crisis after the other.

DA leader Mmusi Maimane has withdrawn his candidacy for premier of the Western Cape.
News
3 years ago

If he was not mishandling the entire Patricia de Lille Cape Town mayorship fiasco, he was allowing his lieutenants to send out confusing signals to the public about the party's stance on black economic transformation.

The unnecessary confusion he caused over the past week when he reportedly availed himself to become the DA's candidate for Western Cape premier next year, has left him looking even weaker and not in charge.

For the purposes of this column, we would not dwell into the strategic blunder of the DA leader choosing to run for office in the Western Cape rather than nationally while at the same time wanting voters to believe that his party will bring the ANC below 50% nationally and in Gauteng.

His bid for the Western Cape post was an admission that he thinks David Makhura will remain premier and that Ramaphosa will win the ANC enough votes to form the next national government.

But what is more devastating for Maimane and his standing within the party is that he bid for the job and failed!

Since becoming party leader, Maimane's greatest challenge has been that of convincing voters that he is as much in charge as Helen Zille and Tony Leon were when they led the party.

Even those who believed in him and wished him all the best needed convincing.

Western Cape economic opportunities MEC Alan Winde has emerged as the DA’s preferred candidate to replace Helen Zille as premier after next year’s ...
News
3 years ago

I remember interviewing one of his childhood friends in Dobsonville, Kgotla Molefe, and asking him if he would be voting DA now that Maimane was its leader.

"...what if he wins and then they throw him out and replace him with ungamla?" responded Molefe.

I for one do not believe Maimane to be anyone's puppet. He is an ambitious young man with a vision for the country that is perhaps difficult to embrace in a society where racial inequality remains a reality.

However, for him to be able to sell that vision; to present himself and the party he leads as a true and viable alternative to the ANC government, Maimane needs to start demonstrating clear and stronger leadership of the DA.

As a traditionally liberal-leaning political party, it is to be expected that various political points of views are publicly ventilated by members of the DA.

But once the leader has pronounced on a policy position, he cannot be second-guessed by some of those he is supposed to lead.

This has been the case with the DA where Maimane has consistently stated that race was crucial in tackling economic inequality in SA, only for some of his followers to suggest that this is not a DA position.