Populist Zuma rubbishes constitutional democracy he and ANC signed up for 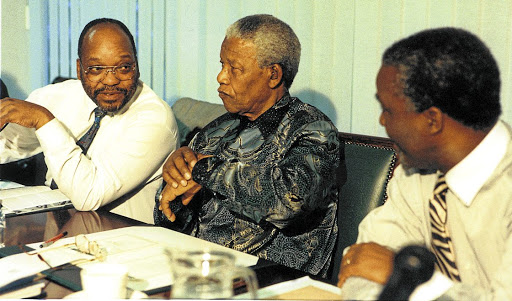 Nelson Mandela is flanked by Jacob Zuma and Thabo Mbeki. The writer says Zuma played a significant role during the multiparty negotiations for a new dispensation.
Image: Jon Hrusa

Oliver Tambo is said to have had one enduring anxiety during his last few years as ANC president in exile: That decades of operating from outside the country and engaging in the armed struggle would harden the attitudes within the ranks of the liberation movement that, when the time comes, it would misread a significant signal that apartheid South Africa was ready to negotiate.

So, like a visionary that he was, Tambo made sure that the ANC remained ready.

As the conflict reached boiling point towards the end of the 1980s, he was already thinking about how a free South Africa will look like and had set up a constitutional committee in Lusaka to start work on a new constitution for a new republic.

When the signal from apartheid Pretoria finally came via one of his trusted comrades, Thabo Mbeki, Tambo sprang into action.

The ANC president assigned Mbeki and his close friend Jacob Zuma to hold initial talks with the representatives of National Party government.

Former president Jacob Zuma has again denied that the South African state was ever captured‚ saying the term was just a “politically decorated ...
News
3 years ago

By early 1989, the constitutional committee had produced a document titled Constitutional Guidelines for a Democratic South Africa.

It was an important document, one that set out the basic principles that would guide the ANC as it negotiated a future without apartheid. Members of this committee included the liberation movement legal minds such as Zola Skweyiya; Kader Asmal; Brigitte Mabandla; Albie Sachs and Penuell Maduna.

The informal talks led to the unbanning of the ANC and other liberation movements; the release of political prisoners and the return of exiles.

Back home Mbeki and Zuma continued to play key roles in the negotiations process, guided still by the document formulated in exile.

In April 1991, the two would have been present when the ANC formulated another important policy document that came to be known as Constitutional Principles For A Democratic South Africa.

It is these documents that guided the ANC's approach to talks at Codesa.

For the purposes of this column, one of the most important principles stated by the party in the 1991 document was: "There will be an independent judiciary responsible for the interpretation of the constitution and the application of the law of the land.

"The judicial power will include the power to review and set aside legislation and actions which are unconstitutional. A Constitutional Court, appointed by the president on the recommendation of a judicial service commission, or by other methods acceptable in a democracy, comprising of judges, practitioners and academics would be set up."

Former president Jacob Zuma has encouraged students to be job creators rather than jobs seekers.
News
3 years ago

This was a principle the ANC adopted on its own, not as part of some behind-the-scenes horse trading with the National Party.

One was therefore taken aback on Wednesday to hear Zuma, who had served as one of ANC's chief negotiators in 1991 and was a member of the powerful ANC "top six", denouncing and distancing himself from the constitutional democracy that came as a result, mainly, of the ANC's principles.

"[Constitutional democracy] means that parliament does not have the last word," Zuma complained to students at the Walter Sisulu University of Technology in Mthatha during his Wednesday speech.

Capitalising on the ignorance of his audience, he spoke as if the ANC had preferred parliamentary democracy - where the legislature had a final say - but was forced to accept constitutional democracy at the negotiating table.

He also spoke as if the process leading up to the drafting of the final constitution was not of itself democratic.

Yet it was the ANC, under Tambo, that insisted that the final constitution of South Africa would be the work of democratically-elected public representatives who would constitute themselves into a Constitutional Assembly.

Those unfamiliar with his way would mistakenly dismiss Zuma as "ignorant". But that would be a grave mistake, he is fully aware of the facts but - like he has done before - he is reinventing himself as a populist demagogue to gain public support in a bid to politically fight off his troubles with the law. The students fell for his trick, hopefully the rest of SA will refuse to be hoodwinked again.