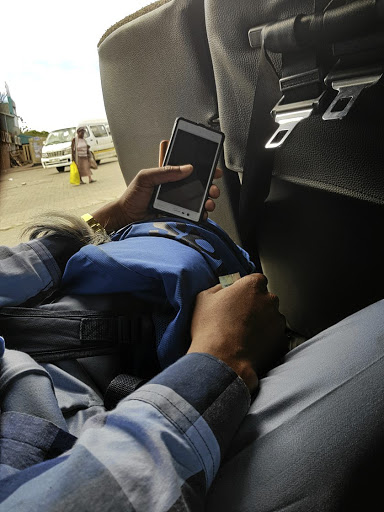 Sharing a taxi seat with a man wearing an 'isphandla' on his wrist is tricky, says the writer.

I was bruised on my left hip after a short ride in a taxi to the rural side of my life.

Second row of a comfy Quantum, I sat precisely 15centimetres away from the lady on the right because she reeked of undead fish.

I did suspect it was the stink of you know what, but it was a Sunday - and my priority was to keep my thoughts pure.

Nonetheless, I wanted none of that odour on my favourite hoodie. Of course karma was going to punish me for thinking I smell better than the average passenger.

In came a handsome gentleman (at least by the standards of Tshatha and Izingane Zoma) clad in all shades of blue, right to the Brentwood trousers in a serene pastel.

There is a general entitlement to space among men around here.

Since the eradication of the four-four rule in taxis, they take the liberty to sit like kings, legs split at a liberal acute angle.

Then the gentleman sat right on top of me. There's very little flesh of hips on me to begin with, and he threw himself on all of it.

Now, if you are familiar with the Brentwood brigade you will understand that they're generously gifted on the posterior. Probably something to do with that constant squatting when doing the "Zulu dance".

I must have been carrying a heavy load of squat-hard ass on my fragile pelvis. And to his delight, I squeaked "Ahhhwu!"

Holding key to mobile fridge not for the faint-hearted

Any respectable family member who has contributed financially to a family event understands that the mobile fridge is a prized trove.
Opinion
3 years ago

He gave me a shiny grin - something like 24-carat gold - as he slowly picked his weight up and resettled on the seat.

This is when he knocked me right on the iliac crest with his weapon.

He was carrying a gun. Neatly nestled under his belt and shirt, a hard, cold metal. It hit me so hard I sunk into the seat, stretched my legs forward, and slowly moved towards Miss Fishtail on my right.

I was hurt. Injured actually. And I was too afraid to confront him because he wore a scary furry wrist band, isiphandla; the strands of the fur as long as my fingers. Whatever grey animal was sacrificed for that band died a painful death.

I can only speculate that he made it as a trophy, after he shot and killed his neighbour's pet baboon, because nobody's ancestral woes can be so deep as to demand isiphandla of such monstrous proportions.

I am not usually scared of confronting those who hurt me, but sometimes you just have to choose your battles. I was locked between a weapon and seafood. I kept quiet and soaked in the stench of fish for a whole 22km of paid travel.