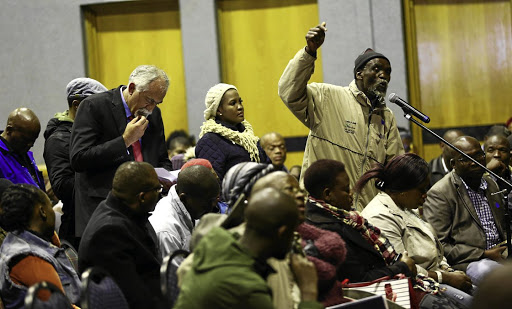 People came out in their numbers to make submissions on the proposal for land expropriation without compensation.
Image: Masi Losi

The joint constitutional review committee that is overseeing the process on the proposal for land expropriation without compensation has concluded oral submissions.

It was an opportunity to hear from a myriad of organisations that have applied their minds to the issue and have produced findings and recommendations based on their research and expertise.

But it was also an opportunity to see the hardened attitudes of certain sections of South African society on full display.

Most notable was AfriForum's submission.

In the 10 minutes allocated for its presentation, the deputy CEO of the rights group claiming to represent the views and interests of Afrikaners, Ernst Roets, put on full display his arrogance and disdain not only for the ANC and EFF in particular, and committee and the constitutional review process in general, but for the very premise upon which SA's constitutional democracy is built.

The conduct of the EFF's representatives in parliament is infantile and racist‚ says trade union federation Cosatu.
News
3 years ago

Roets exuded smugness as he lectured the committee on AfriForum's version of the history of land dispossession in the country. He was unperturbed that much of it is ahistorical.

AfriForum aimed at painting a picture of colonial settlers who did not benefit from the skewed power relations perpetuated by the colonial and apartheid state that used violence and a string of unjust laws to strip native Africans and other groups of their dignity, liberty, rights and the land.

The group's assertion that land hunger in rural areas is a fallacy and selective use of statistics to claim that the demand for land is only a matter of rapid urbanisation of black people in contemporary SA is an unsophisticated attempt at exonerating white farm- owning beneficiaries of colonial and apartheid policies.

The preamble to the constitution begins thus: "We, the people of South Africa, recognise the injustices of our past..."

To deny that injustice and even to minimise it is to reject the foundation of the new SA. It is from this that the constitutional imperative of redress for the injustices of the past arises.

And redress is a key value and aim of the post-apartheid constitutional order. Judged by its own utterances, AfriForum does not align itself with the constitution.

During the committee sitting, Nick Koornhof, an Afrikaans MP, characterised AfriForum as the white version of Black First Land First.

It is not difficult to see why such a comparison seems apt because the BLF has demonstrated a similar kind of hatred and disdain for white people as a whole, just as AfriForum did for black people.

But there is a marked difference between the two.

The BLF has generally acted within the confines of the country's constitutional edifice, facing sanction where it has infringed on the rights of others, including journalists.

AfriForum sees itself as above the constitutional and democratic edifice.

Its submission did not address the matter of the constitutional amendment, but was aimed at patronising the committee and the black- led government and parliament by lambasting it for its failure to lead and deliver for its own people.

It was an attempt at whitewashing the deep effects of the oppression, exploitation and suppression of white-led regimes over centuries, the legacy of which remains to date.

Behind its submissions, AfriForum has shown a complete disregard for the sovereignty of the republic by seeking an audience with a foreign state, the US, to propagate a false narrative of white genocide and state- sponsored land grabbing.

After such actions, which embroiled SA in a diplomatic row with the US, it was completely disingenuous of AfriForum to even appear before the constitutional review committee.

Unfortunately, AfriForum May represent millions more than the 200 000 members in their attitude.