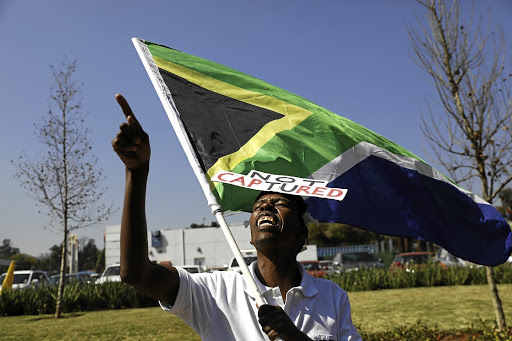 A protester gestures to someone outside the venue of the commission into state capture.
Image: ALON SKUY

It certainly must be one of the most highly rated shows on TV at the moment - if not the hardest hitter when it comes to ratings.

I am, of course, referring to the televised saga that is called the commission of inquiry into state capture, scripted and directed by judge Raymond Zondo.

It would be a great comfort if this show were a real soap opera - you laugh and cry now, and tomorrow you've moved on with your life.

Except the commission is only just the beginning towards a bigger tragedy: if implicated, and there's enough evidence to have them brought before a court of law, some of our business people and politicians, including former president Jacob Zuma, might actually be prosecuted.

But, as we all know, when heads are likely to roll people can go to extremes to stop or sabotage the wheels of justice, by any means necessary. This, of course, would include bribery or murder.

Jessie Duarte says she is prepared to appear before the state capture commission of inquiry.
News
3 years ago

This reality kept knocking me on the side of my big head as I sat watching the testimony of former head of communications and information systems (GCIS) Themba Maseko which I found so detailed and convincing.

After Maseko's testimony, his successor at GCIS, Phumla Williams, delivered an equally thorough account of what happened, speaking in a manner that would convince the most sceptical soap opera fan.

Their testimonies were a respite from that of former ANC MP and parliamentary caucus chairperson Vytjie Mentor who appeared before the commission last week.

Mentor was inconsistent and seemed so discombobulated it was sometimes hard to follow her narrative. She was like a soap opera artist with so much promise but reading from the wrong script, so much so that it affected her poise. One can only empathise with her. The stress must be unbearable.

She has reportedly been marginalised, if not demonised, by former comrades within the organisation which she served selflessly for years.

The testimonies that have thus far been heard are a sure indication that what we, the taxpayers and citizens of this country, know about government corruption at large and state capture in particular, is just the tip of an iceberg. The malaise is much deeper.

Would it be asking for too much if one suggested that those who served as ministers and deputy ministers during Zuma's tenure be called to testify?

Ajay Gupta's lawyers argue that he must be allowed to cross-examine the witnesses who implicate him.
News
3 years ago

This question is informed by the fact that it appears all departments and ministries were, in one way or another, affected by the movements of the Gupta brothers and others implicated.

From what I have gleaned not only from the testimonies, but also from written accounts in different books dealing with the Zuma years, the Gupta brothers stepped on many toes.

It seems to me that whenever the Guptas sneezed the entire South African body politic caught Guptamylitis, to coin a name for the sickness which I think the commission is trying to get to grips with.

After all has been said and done, one hopes the commission is not an end in itself.

One hopes the prosecuting authorities will gather from the commission enough information to start building solid cases against those implicated, with the view to prosecuting them.

Politicians and civil servants must know that corruption will not be tolerated. We live in hope.