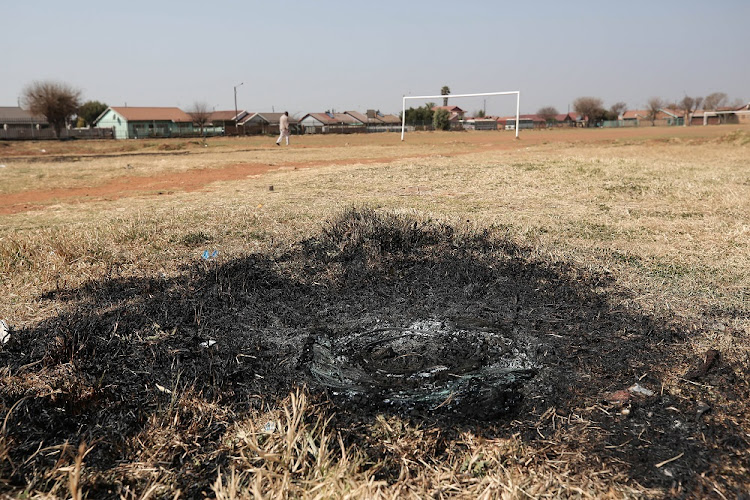 The scene where Siyanda Mjoli was necklaced in Daveyton, East of Johannesburg. A mob attacked and burned Mjoli with a tyre after being accused of being involved in gang related activity in the area.
Image: Alaister Russell/The Sunday Times

It's that time of the year when pupils across South Africa are gearing themselves up for the crucial year-end examinations, and we always wish them well in the hope they will pull through.

Pupils sacrificed a lot throughout the year for the examinations and the only thing they want at this time of the year is the absence of disruptions.

But not all pupils have a common goal.

There will always be rotten apples within learning institutions whose sole mission is to cause mayhem at schools.

We are now tired of these thugs at our schools and we can't allow any form of violence and mobocracy to overwhelm school policies and systems and, most importantly, the law of the land.

Schools, like any other institutions that are governed by the rule of law in South Africa, should not be turned into battle fields of some sort.

Two people have been arrested in connection with a fatal “mob justice” attack in Daveyton‚ Ekurhuleni.
News
4 years ago

It is for this reason that we condemn in the strongest possible terms the nefarious action by a gang of thugs masquerading as law-abiding community members who caused pandemonium at the United Secondary School in Daveyton, Ekurhuleni, last week by setting a young man alight with a burning tyre.

The young man was kidnapped elsewhere and dragged to the school premises to point out one of the pupils suspected to be a gangster. But after failing to find the pupil in question, the community members set him alight.

He was rescued by police and admitted to hospital.

Another young man, aged 21, was killed overnight near another school in the area, according to emergency services.

This is scary as we are afraid that other community members will copy this form of mob justice.

We can't afford to resort to the era of "necklace" lynchings - the most gruesome method of killing political opponents during the height of apartheid in the country.

We welcome Gauteng education MEC Panyaza Lesufi and community safety's intervention to bring about peace in the area, and ensure that learning is not disrupted at the affected schools.

We also hope that the high-level police task team established by Lt-Gen Deliwe de Lange yields positive results in bringing those involved in this barbaric act to book.

The family members of one of the three men who were attacked by a lynch mob over allegations of crimes say they felt helpless when their son was ...
News
4 years ago
Next Article