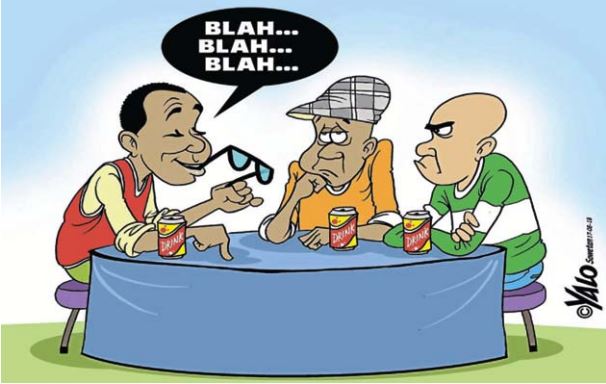 There's always a friend who has an opinion on everything.
Image: Yalo

Where is that friend of yours who has an opinion on everything under the sun, and always succeeds in taking charge of a discussion, only to change it to suit him?

Yes, everyone has that kind of friend; if not a friend, then an acquaintance who invades your space, and whose claim to fame is that he is articulate.

You'll be sitting around a table with friends, eating or drinking, and one of your party who's just returned from the United States - with selfies to prove it - will be waxing lyrical about the fauna and flora on the Rockies.

Then the Articulate Friend would butt in: "You know, your talk about those trees in America reminds me of an interesting gooseberry forest that used to grow on the periphery of our township.

"Incidentally, it was in that bush that I lost my virginity; but that's not the story I want to tell. I want to harp back to my days as a guerrilla fighter, when we used that bush as a hideout from the Boers, ready with our AK47s ."

Some men hide behind the 'culture' fig leaf to continue patriarchal practices on women; this must come an end
Opinion
3 years ago

Too stumped for words, you'd allow him to usurp the floor, bamboozling you with a narrative that has so many twists and turns that by the time he is done, your head is throbbing with pain.

If the Articulate Friend is in a generous mood, he'd wrap up his story in five minutes. Then someone would start a subject about the aesthetics of the Maybach as opposed to the Ferrari.

Almost choking on his drink, the Articulate Friend would jump in: "You can say what you like about all these fancy cars of yours, but nothing will ever beat my daddy's Dodge Monaco which he used to race down the streets of Tembisa in the 1970s; he almost knocked down an old lady who was carrying a baby, but that's not the story I want to tell."

The friend always wins debates not because of his intellectual prowess; he is gifted with a voice that will remind you of a farmer shouting to his pigs across the valley to come and get their food. Mind you, our friend cannot abide interruptions while he is on the floor. When you try to butt in - if only to remind him that he interrupted you when you were about to reach the punchline of your story - he'll be the first one to say: "Listening is a skill."

Apart from his voluble voice, the Articulate Friend has a secret weapon which he uses to silence dissent: he's the one always buying the drinks. As a result, even when he is spewing balderdash of the highest order, those around the table will lean forward, nodding and grunting their assent.

If one of you is stupid enough to challenge him by quoting from a book, the Articulate Friend will retort: "Who wrote that book? White people! You're brainwashed. I am not bragging, but I call myself an organic intellectual. I don't read books or newspapers because they're meant to derail us from our indigenous knowledge systems."

If a naughty friend at the table corrects his grammar or pronunciation, the loquacious one will smirk and say: "English is not my mother tongue. And there's no master of pronounsation (sic)."

When everyone has been browbeaten into silence, the Articulate One will sit back and enjoy his drink for a short while. Suddenly you will notice that he is seething with anger. Why? He wants to say something, but lacks the skill to launch and sustain a discussion on his own. He depends on someone to start so he can jump right in. And take over. See? You can't win against the Articulate Friend.