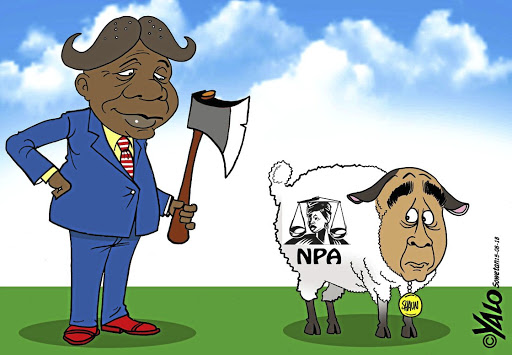 Replacing Shaun Abrahams as national director of public prosecutions (NDPP) with a credible candidate will go a long way to repairing the reputation of the National Prosecuting Authority but there is no magic fix for the institutional paralysis and contamination of the organisation.

Both Abrahams and the former acting NDPP Nomgcobo Jiba acted wilfully to protect former president Jacob Zuma, his cronies and perpetrators of state capture from prosecution, while selectively targeting their political opponents.

Abrahams created an embarrassing fiasco by trying to charge Pravin Gordhan when he was finance minister and later withdrew the charges.

Under his watch, evidence of state capture has been awash in the public domain, but the Gupta network has been relatively untroubled. The NPA has so far only acted on the Estina dairy farm case and the alleged bribe offered to former deputy finance minister Mcebisi Jonas.

The NPA's handling of these matters has left much to be desired. Civil society activists who have been working on state capture are now concerned that future prosecutions might be contaminated by the NPA's incompetence, as well as deliberate attempts to botch the cases.

A preservation order obtained by the Asset Forfeiture Unit against the accused in the Estina case was lifted in May after the Free State High Court said the affidavit prepared by the NPA was lacking and the allegations amounted to speculation. The NPA was also embarrassed in March when the court ruled that R10-million in the Guptas' accounts be unfrozen.

In the Estina case, the NPA did not produce the documents made available in former public protector Thuli Madonsela's State of Capture investigation, including the bank records showing the flow of money.

"It is as if they have forgotten how to conduct a case. They no longer have the expertise. The incompetence is now ingrained," said a source with intimate knowledge of the case.

But was the NPA acting deliberately to damage its own cases?

The recent decision to charge Duduzane Zuma with corruption relating to the alleged attempt by the Guptas to bribe Jonas is troubling. While Jonas mentioned that the meeting with Ajay Gupta, who allegedly offered him a R600-million bribe to accept the position of finance minister, was facilitated by Zuma and businessman Fana Hlongwane, only the former was charged.

Former NPA head Mxolisi Nxasana needs to "find" the R10-million the Constitutional Court ordered him to repay.
News
2 years ago

The case against Zuma appears weak as Jonas did not implicate him in the conversation where the alleged bribe was discussed.

It is possible that because of the NPA's handling of the matter, charges against Zuma might be dropped down the line. This will have implications for the prosecution of the main accused, Ajay Gupta.

President Cyril Ramaphosa has, presumably, long been applying his mind to the appointment of a permanent and credible NDPP.

In December, the North Gauteng High Court gave him the power to appoint a new NDPP when it nullified Mxolisi Nxasana's removal from the position and invalidated Abrahams's subsequent appointment.

So even before becoming president, it was Ramaphosa's responsibility to assign someone to the hot seat. The process was held up as the Council for the Advancement of the South African Constitution applied to the Constitutional Court to confirm Mlambo's ruling.

Over the Christmas break, there was talk of Ramaphosa consulting people about names of potential NDPP candidates, as one of his first priorities after being elected ANC president was to deal with the paralysis at the NPA.

Eight months later, following Monday's Constitutional Court judgment on the matter, Ramaphosa is finally in the position to do what he promised in his State of the Nation address in February: "We will urgently attend to the leadership issues at the National Prosecuting Authority to ensure that this critical institution is stabilised and able to perform its mandate unhindered."

In theory, nothing stops Ramaphosa from reappointing Abrahams as the courts did not pronounce on his fitness to hold the position or his performance.

But Ramaphosa is aware that Abrahams has been an unmitigated disaster and is therefore looking elsewhere for a permanent replacement.

Departure of Abrahams will bring 'stability' to NPA

The Constitutional Court judgment setting aside the appointment of Shaun Abrahams as head of the National Prosecuting Authority (NPA) upholds the ...
News
2 years ago

A new NDPP on his or her own will not be able to build the credibility of the NPA. With Jiba on the ropes, there is also likely to be a vacancy for one of the four deputy national directors of public prosecutions.

The NPA Act also gives the president the powers to appoint any number of special directors. Ramaphosa should seriously consider appointing special directors on state capture who could build sound and convincing cases that would go to trial and result in successful prosecutions.

It is unlikely that the cohort that worked under Abrahams would be able to do that.

Political influence and incompetence at the NPA contributed to the lack of accountability and general disrespect for the rule of law in the country.

The fact that the NPA has not been able to secure a single high-profile corruption prosecution since former police commissioner Jackie Selebi's conviction in 2010 is testament to the level of dysfunction crippling the pivotal cog of the criminal justice system.

Hopefully that era is about to end.