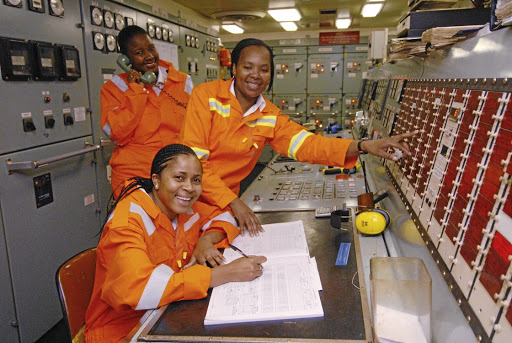 The writer feels Pillay's comments are a stumbling block to the advancement of women engineers like this trio of Sibongile Nomala, front, Nomazwi Ntsinjana and Kim Mainguy.
Image: IVOR MARKMAN/ The Herald

He wrote: "Given that money, time and resources are constrained, and evidence pointing to women being predisposed to caring and people careers, should we be investing so heavily in attracting women into the STEM (science, technology, engineering and math) careers, specifically engineering, or should we invest it in creating more gender equal societies?"

This statement is made by an individual who is expected to be an embodiment of the engineering institution of our country.

What does this say about his thinking regarding women's competencies and abilities? The statement says to me that Pillay believes that a woman's role is not in the boardroom, but in the bedroom. He is saying to me and millions of women in our country that their place is in the kitchen.

He is spitting on the graves of those gallant, brave women who took on the obnoxious system of apartheid head-on and won.

He is also saying to the thousands of women who marched to the Union Buildings as part of the total shutdown protests that whatever you do, gender equality is but a pipe dream.

Pillay penned an article in the July Civil Engineering magazine questioning whether South Africa should invest in women in science‚ technology‚ ...
News
4 years ago

I sit here and ask myself if he has any daughters, is this how he is raising them? - to believe that they will remain minors and nannies.

According to him, women are there to serve men - nothing more, nothing less. I find this not only archaic and retrogressive but sadly demeaning to women who are in the engineering sector in South Africa.

I find this extremely toxic for someone who purports to lead an organisation that is supposed to produce women who will ensure that our economy matches that of the developed world and we become a prosperous country.

He went on to write that where women and men do the same amount of work but are not paid equally, it was because women are agreeable.

His advice to women? Stop being agreeable when negotiating pay.

Blaming the victim is the easiest route for him, rather than interrogating the power inequalities prevalent in the world of work, which is largely dominated by men.

I am convinced that he lives in his own world.

He is institutionalising sexism in the workplace under the guise that women are better suited to do the caring work and not engineering.

I am shocked that the SAICE decided to keep Pillay in his position.

Its president, Errol Kerst, said: "While the publication of Pillay's article was unfortunate, we cannot ignore his invaluable contribution to SAICE and the broader engineering sector over the past eight years.

"The board has accepted his apology."

In a short statement‚ Pillay expressed regret for writing the controversial article‚ in which he insinuated that it was not a good idea to invest in ...
Business
3 years ago

The board is prepared to live with the pain Pillay has caused with his thinking around women, and is also comfortable to have at its helm an individual who sees women as not belonging anywhere else other than being carers, nannies, cooks and child bearers. I wonder who else sits on that board and if there are women.

If there are, what was their reaction to a deleterious piece that essentially demeans women in the engineering sector? Was their attitude that of accepting that it's still a man's world and there is very little that women can do to change this?

If this is their attitude then they must know that they are colluding with and condoning women's disempowerment.

Finally, I hope that the numerous business bodies in our country will call on the engineering board to do the right thing and ask Pillay to step down with immediate effect.

Doing nothing will render their gender equality policies and pronouncements meaningless.