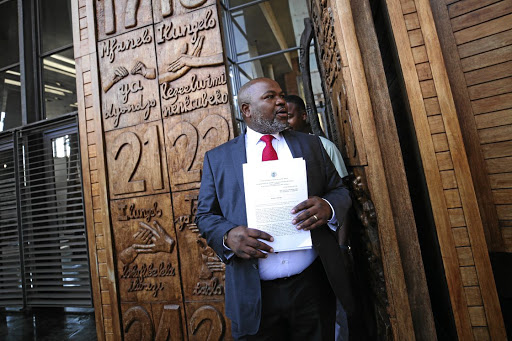 Former NPA head Mxolisi Nxasana at the Constitutional Court in Joburg yesterday. The court ruled that the appointment of Shaun Abrahams as NPA head was not constitutional and invalid.
Image: Alaister Russell

Perhaps it may be the right moment to question the power bestowed upon the president to appoint and remove the head of the National Prosecuting Authority.

It may be the right time to question the independence of the NPA and the cascading effect this has on the institution which ordinary South Africans rely on.

History informs us that the prosecuting authority, in so far as political independence is concerned, has failed to uphold its duty to exercise its functions without fear, favour or prejudice.

The indicators are clear. Not one national director of public prosecutions has successfully completed their 10-year term. The first and longest serving NDPP, Bulelani Ngcuka, eventually vacated his office and reports suggest that the "resignation spoke of political pressure and not just a personal desire to move on".

Ngcuka's biggest mistake was announcing his intention to investigate then deputy president Jacob Zuma for possible corruption in the multibillion-rand arms deal.

Though it was denied that Ngcuka was pressured to leave, we should have known that the NPA was in ruins when the career of Ngcuka's successor, Vusi Pikoli, also came to an abrupt end.

Like Ngcuka, Pikoli found himself entangled in politics when he fell out of favour with former president Thabo Mbeki, because he dared to go after the late police commissioner Jackie Selebi for corruption, racketeering and defeating the ends of justice.

Mbeki denied that any politics were at play, instead telling the country that Pikoli's suspension was due to an "irretrievable breakdown in the working relationship" between Pikoli and the executive.

Selebi was eventually prosecuted, convicted of corruption and sentenced to imprisonment for an effective 15 years.

Another issue is that any appointed NDPP exercises too much power.

He or she has the final say over who is prosecuted and may interfere with any prosecution. Moreover, prosecution policy is determined by him or her.

Furthermore, according to law professor WP de Villiers, while the separation of powers performs the service of preventing too much power being accumulated in one institution, the Constitutional Court has held that the fact that the president appoints the head of the NPA is not, in itself, a breach of separation of powers.

The constitution guarantees that the prosecuting authority exercise its functions without fear, favour or prejudice.

However, history tells us that the executive has violated this guarantee many times over.

During the Pikoli matter, Adam Habib said that "if the president suspended Mr Pikoli on the grounds that he had issued a warrant for the commissioner's arrest, then it suggests that an invasion is being made into an independent institution's operations.

Intervening in the operations of the National Prosecuting Authority constitutes a violation of our constitution."

The power remains vested in the president to appoint any NDPP of his choice, but this cannot, in strictness, be acceptable any more.

This power ought to be shifted to parliament in order to guarantee the NPA's independence once and for all.

Shaun Abrahams should be the last NDPP who brings the administration of justice and the office of the director into disrepute without even so much as accounting to South Africans.

He acted shamelessly, with impunity, by bringing stillborn charges against others, while serving as gatekeeper for former president Zuma during his tenure as statesman.