Confusing lawlessness with radical politics can only give birth to bandits 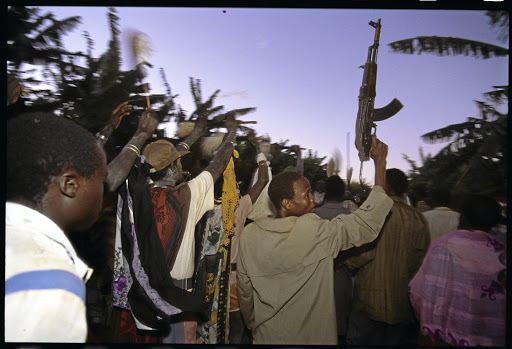 A man from the Ugandan army brandishes a rifle during a circumcision ceremony. The writer says firing randomly at parties and funerals is now a fully entrenched culture in South Africa. /CORBIS SABA/Corbis via Getty Images / Louise Gubb

On the afternoon that the ANC, and by extension its president Nelson Mandela, was announced the winner of the first democratic election in SA, my township, like many others around the country, erupted into song.

There was much chanting of revolutionary slogans, but the dominant song in our streets that day was new and spoke to hope of what a Mandela government would do for people.

Although most of us had first heard the song when it was sung by a choir on TV at the Johannesburg ceremony to announce the official results, it's message seemed to be aimed specifically at ours and many townships like ours.

The days leading up to election day were the most violent in my hood. The last time we had seen such high levels of fighting was in 1985, following the killing of activist lawyer Victoria Mxenge.

Scores of houses were burnt down; people killed and many others displaced as the disagreements between political leaders at the negotiating table translated into bloodletting at grassroots levels.

Among those who died in the weeks preceding April 27 1994 were six local activists whose only crime was to try to negotiate peace between residents and hostel dwellers.

But on election day, and the days that followed immediately thereafter, the guns went silent, thanks to the last-minute political deal that led to the IFP agreeing to participate in the polls.

The singing and dancing in the streets was more festive than revolutionary.

And then a childhood friend, let's call him Lembe, pulled out a 9mm pistol and began firing random shots in the air.

I was startled and the idea that the world of guns had disappeared along with formal apartheid on April 27 was shattered.

Soon others joined in and the random gun salutes were now drowning out the singing and forcing many residents to retreat to the safety of their homes. In no time, only former military combatants, self-defence unit members and their hangers-on were still in the streets.

A few years later Lembe died, a victim of gun violence. His mother held a senior and very respectable position in a local church.

Yet one afternoon, as preparations for the funeral were being made, she called a few of Lembe's friends by her mourning mattress and made an unusual plea for a woman of her age and standing in our community.

Her son, she said, loved guns and would be disappointed if his funeral was not accompanied by gun salutes. And so, on the day of his funeral, the neighbourhood rained bullets.

Yet no one seemed surprised. Guns and bullets had become part of the culture. Two decades into democracy this culture is now fully entrenched.

Why are we so obsessed with guns, why do we think a funeral or a party has to be accompanied by gunfire?

I don't know for sure if EFF leader Julius Malema fired live ammunition or not during his party's 5th birthday bash in East London the other day. But even if he didn't fire the gun, why did he feel the need to display a weapon like that?

Whether it is at grassroots level or in the upper echelons of leadership, we seem to confuse radical politics with militarism and lawlessness.

Yet militarism is not only anathema to democracy, it hinders social development and service delivery.

Without a just cause to pursue, militarism turns would-be activists for positive social change into bandits.