Gwala's triumph is giving hope to a nation in distress 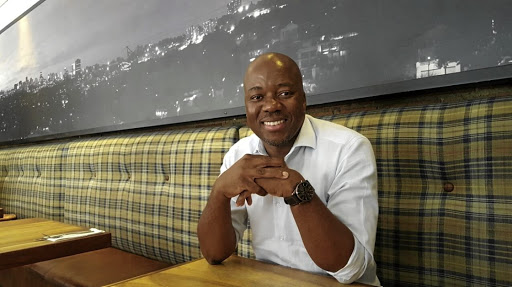 Xolani Gwala is back behind the mic.
Image: Lesley Mofokeng

I was in Munich, Germany, last September when I heard that star broadcaster and journalist Xolani Gwala was very sick.

On the Radio 702 livestream, I could hear the voice of the usually unflappable Stephen Grootes quiver as he spoke to Gwala about his condition: advanced colon cancer.

Gwala's oncologist Dr Omondi Ogudi explained that the cancer had spread to his liver.

Gwala was courageous in sharing details of his illness with the nation and, in an extraordinary way, comforted people that he was in good hands and mentally geared for what was coming. "It's going to be a long fight, but a fight that I'm ready for," he said.

On the other side of the world, I felt disoriented and frightened. Gwala and I are not close friends but we both grew up in journalism, journeying from the tumult of the violence in KwaZulu-Natal through the political intrigues of democratic South Africa.

The media fraternity is an odd, interconnected community that tries daily to piece together what is happening around us, and occasionally succeeds at it. We are stuck together, the ebb and flow of our lives determined by an unremitting news cycle, telling history as it happens.

When something bad happens, we realise the value of each other - like when the media is under attack or when SABC journalist Suna Venter died from a broken heart.

Later that day, I walked into the Cathedral of Our Lady in Munich to pray. The magnificence of the elaborate Gothic architecture and a giant artwork of the Assumption of Mary into heaven have the effect of diminishing one's own existence so I struggled to find the right words.

A year after finding out he had advanced colon cancer‚ Xolani Gwala says fighting the disease has been “hell”.
News
4 years ago

All I could ask was: "Please don't let him die."

Last Thursday afternoon, Gwala introduced himself back on air and said his treatment had been successful. He explained that he had had three operations and aggressive chemotherapy. It would take time before he could consider himself cancer-free but for now he was healthy and ready to go back to work.

The reaction to this news was extraordinary. It was not just that a prominent personality had overcome a life-threatening illness but that a genuinely good person was back to help us get through the days of our lives.

I have been thinking about why the news of his illness had been so distressing and why the sound of his voice on Thursday prompted such an emotional reaction. South Africa has a serious problem with leadership. For the greater part of the post-democratic era, bad political leadership has had catastrophic consequences for our nation.

From bad economic policies that entrenched poverty and inequality, to a disastrous Aids policy that resulted in hundreds of thousands of deaths before treatment was rolled out, to the abuse of state institutions and a crippled criminal justice system, our nation has suffered immeasurably.

People in positions of political leadership have the power to decide the course of our lives, and because of their social status also become trendsetters and role models.

Across the political spectrum, many leaders in whom people placed their trust have used their positions to amass wealth, corrupt the state and live large at the expense of taxpayers.

Others have neglected their duties without shame, caused death and suffering, and contributed to the creation of a barely functioning state system.

Every day we await a new calamity as the education, health and social security systems continue to flounder.

Whether it is state capture, Life Esidimeni or Marikana, there is no sense of accountability, particularly for political high-fliers.

A politician is able to beat up women and still be granted a platform as a "legend" to speak on gender-based violence.

Politicians inflame hatred, create false expectations and manipulate their supporters into believing they can deliver their salvation when they have no ability to do so. The state of moral decay in our society is a reflection of the type of people we uphold as our leaders.

Gwala was all smiles and seemed to be in good spirits when he took a selfie with 702 colleague‚ Aki Anastasiou.
Shwashwi
4 years ago

We are all desperate to believe there are still good people who could step up and chart a new course. This is why so many people bought into the notion of the New Dawn and were wishing President Cyril Ramaphosa to succeed.

With the passage of time, he, like many people we build up in our minds, has begun to disappoint us. Ramaphosa will do what he has to for political survival and expediency, regardless of the consequences.

Gwala has not sought any leadership position or special status in society. He is simply dedicated to his work, does it superbly and cares about the society on which he commentates. In a remarkable way, his triumph over his sickness has provided comfort to a despondent nation.

This week, Gwala has been speaking about difficult subjects such as gender abuse, rape and euthanasia with utmost sensitivity and respect.

That is so rare in a world defined by self-centredness and exploitation of others.

Within a year, South Africa will go to the polls to elect new leaders and many people will feel dejected about the options we have. Mercifully, Gwala will be among us as we tell this next chapter of our history and continue the search for our True North.