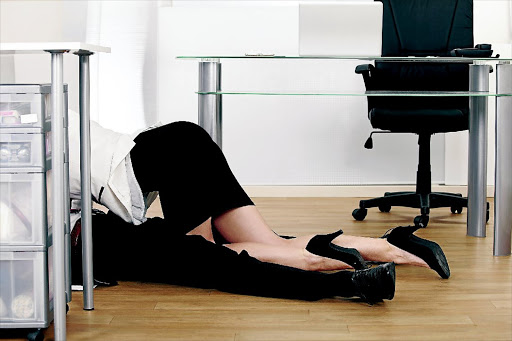 A couple overcome by passion get intimate on the floor in the office, one of the ways to treat your partner to surprise sex
Image: ISTOCK

I wish there was some sort of girl code when it comes to friends who hook up with random strangers, and or their ex-boyfriends, when we are out partying.

No one sets out to plan a one night stand, unless you are a hunter on the prowl.

I find it puzzling when you go out on the night with a friend, and they magically disappear on the dance floor because they got waylaid by Tom on the way from the toilet.

I thought this only used to happen during our youth when my young cousin related how she was bamboozled when a friend she had gone to a party with recently, did not have the courtesy to send her a text message that she was sneaking away with an ex-boyfriend after the two met again in a house party two years after their affair ended.

To top it off, the two had gone out partying in the friend's car who had invited her to tag along for company. She says what was interesting is that she could see her friend's car parked in the driveway, but someone told her she saw the same friend get into the car with the boy in the red hoodie [the ex-boyfriend concerned].

Now she had to spend money she did not budget to see herself home all the way to Midrand from a party in Dainfern, and she was livid.

The other day while relaxing at home watching TV, a friend called to alert me to switch on the radio.
Opinion
3 years ago

In our days, there were not many cellphones and the reliable Uber, so going out as a group of girls was also about safety in numbers. Imagine your lusty friend leaving you stranded kilometres from home as she hunkered after a new or old flame.

In my cousin's case, the friend was too embarrassed to explain to her that after disparaging her boyfriend's character during their time apart, that her heart forgot all those bad things he had done when she locked eyes with him.

So the best course of action was to dodge my cousin.

Weeks later, when it transpired they could be rekindling their old love, my cousin found herself having to recall what bad things she had said about the boyfriend during their break-up.

You know friends usually take your side by pointing out your ex's negative attributes in their attempt to help you get over him.

I told her about a time when a former colleague also pulled a fast one on me and another acquaintance.

After inviting us on a road trip to Botswana for a weekend party hosted by her cousin, she left us in the lurch when she disappeared with one of the male guests that Friday night, only to resurface on Sunday morning as we were about to head back home.

He will love you more if he feels that you have slept with a small number of men in your past.
Opinion
3 years ago

We spent a very uncomfortable Saturday with her cousin whom we had only been introduced to the previous day as we searched for her, and debated if we should leave Botswana that day without her. What would we tell her parents? Were we the last people to see her alive?

What if the cops include us on the list of suspects in her missing case? We had too many questions and no answer until the friend of the guy she went off with came back to inform us that we should not worry about her as she was well and loved up some 100 kilometres away from Gaborone.

There are many stories I have heard of friends who would invite you to a party in another town only to leave you stranded when they find a hook-up.

Knowing how unsafe it can be for women because of crime in Mzansi, our friends should be the last ones to place us in such risky situations.

By all means have that one night stand or weekend fling, but if you are old enough to sneak off with Joe during our outing, surely you are also responsible to mention it to your friends instead of leaving them stranded.