Search for car ends in Ladysmith 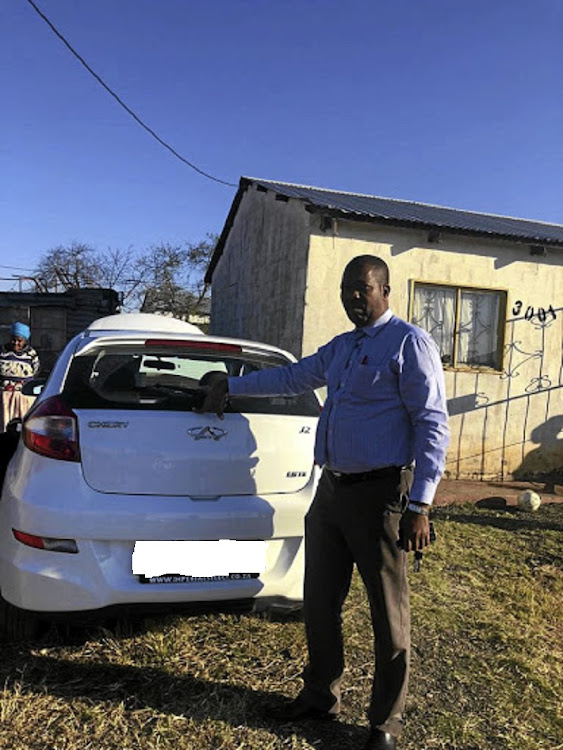 Captain Themba Mvelase with the car Jadine Bennet had lost hope of getting back after a so-called spotter disappeared with it.
Image: SUPPLIED

Jadine Bennet's nightmare is over. She breathed a sigh of relief last Wednesday when she finally got her vehicle back.

Consumer Line helped to trace it to house 3001 Ezakheni section E in Ladysmith where she collected it in the company of her boyfriend and Captain Themba Mvelase of the Ladysmith police station.

The car was damaged. She had to get a local mechanic to fix it before driving it back home to Honeydew, Johannesburg.

The front bumper, the clutch and the CV joints were damaged, said Bennet.

Last Monday we published an article in which Consumer Line exposed an alleged unfair business practice against a KIA dealership in Northcliff, Johannesburg, in which Bennet was made to give away her car to their "spotter", Buyisiwe Maduna-Sibeko.

Bennet wanted to trade-in her 2015 Cherry J2 for a second-hand Kia Rio which was on sale.

She was advised to leave the trade-in car with the dealer for valuation, instructing them to include the amount as a trade-in.

On May 10 Portia Sangweni, the saleswoman, e-mailed Bennet the deal structure on a new Kia Rio model.

She was ordered to collect her car, the Cherry J2, as it was taking up storage space.

Bennet wasn't informed that her trade-in was not included on the sale deal, leaving her with two cars to pay off. This would have left her over-indebted. She says she has a bond of R7000 to pay.

The saleswoman acknowledged she did not load in the trade-in value of the Chery in the deal.

Bennet said Sangweni then promised to find a solution. To sort it out, she was told they had a "spotter" who could get her a client to take over her monthly instalments until September, when the car would be totally out of her name.

This was the beginning of Bennet's worst nightmare. The agreement between her and the "spotter", Maduna-Sibeko, was that the instalments would still go off her account as agreed and Maduna-Sibeko would then reimburse her for each month, Bennet said.

The saleswoman then handed over the car keys to Maduna-Sibeko at the dealership on May 17.

Though they confirmed this in an affidavit, Maduna-Sibeko did not honour her side of the agreement.

Getting desperate, Bennet asked her to return her car, and headed to the dealership who promised to locate her.

Maduna-Sibeko had apparently parked the car at her mother's house.

"I slept like a baby after colleting my car from Ladysmith. I had lost hope of ever finding it," said Bennet.