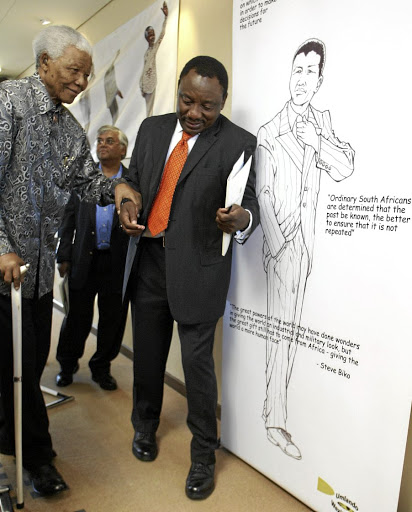 Cyril Ramaphosa models his leadership style on that of Nelson Mandela, but needs Madiba's grit too, the writer says.
Image: Simon Mathebula

On Monday morning, Russian President Vladimir Putin landed in Helsinki, Finland, an hour late for his historic meeting with US President Donald Trump.

He strode down the stairs from his massive custom-built aircraft to his brand new armoured limousine, which the media had helpfully been informed is bigger than "The Beast", the car used by the American president.

Before the meeting began, Putin was already large and in charge, engineering the optics of his power play.

By the end of the day, during which he held one-on-one talks with Trump, there was absolutely no doubt about who had prevailed. During a joint media briefing, Trump surrendered completely to Putin's will, parroting the Russian president's denial of interference in the 2016 US elections and denigrating the FBI and special counsel Robert Mueller's investigation.

Former British prime minister Margaret Thatcher, who, like Putin, understood power and how to use it, once said: "Being powerful is like being a lady. If you have to tell people you are, you aren't."

President Cyril Ramaphosa has to keep affirming that he is "not weak".

On Monday night, during a 90-minute interview with eNCA, the president said he was not a weak leader but was on a mission to build unity in the ANC.

"Leadership is about taking those you lead along with you. Doomsayers want to see us take dramatic decisions that will ultimately divide the ANC," he said.

Congratulations South Africa, you have been gifted two new martyrs.
Opinion
3 years ago

In response to questions from analysts and people affected by crime and corruption, Ramaphosa had to restate that he was strong enough to take decisive actions. He said those complicit in state capture, even his own comrades, would be held accountable.

Why is the country still doubtful about Ramaphosa's strength and ability to act?

Perhaps it has something to do with the fact that the president is so mild-mannered and almost aristocratic in his deportment. Even his threats are politely articulated.

Ramaphosa is trying hard to style himself as the "everyman", a conscious break from the "strongman" image that his predecessor perfected. But the narrative about party unity is undermining Ramaphosa's anti-corruption message as the state capture project was enabled by senior ANC leaders. It is difficult to do both - prosecute crooked ANC leaders and close ranks to protect the party.

The situation is exacerbated by the fact that since Ramaphosa's election, there is no demonstrable evidence of the perpetrators of state capture being brought to book.

This is something he had always aspired to do - to take the baton from Mandela and pursue his vision of nation-building and reconciliation.

However, in between Mandela leaving office and Ramaphosa being elected, South Africa has undergone political tumult, social agitation and economic decline. With perceptible impatience in society over levels of inequality, even Mandela would have problems rallying people now were he still alive.

For the first time‚ Cyril Ramaphosa’s face will appear on the ballot paper in next year’s elections.
News
3 years ago

It is also wrong to frame Mandela's leadership style only as reconciler and father figure. Mandela was firm when he needed to be and was not afraid to challenge the party line. When angered, he could slash his opponents like a samurai warrior. FW de Klerk has still not recovered from the public scourging he got from Mandela at the Codesa talks.

On the centenary of Mandela's birth, it is natural that Ramaphosa, as his favoured son and now successor, would want to honour him by styling himself in his image. But power and leadership are not standard concepts; they are relative to the context and time in history.

There are shades of Mandela that are desperately needed in 2018 South Africa. His nation is in pain and at war with itself. It is why "Ramaphoria" has been embraced almost as a new incarnation of Madiba Magic.

But those who walk in his footsteps also need Madiba's grit and intolerance of corruption and treachery.