Ignorance is the opium of the masses, a breeding ground for quackery of all sorts 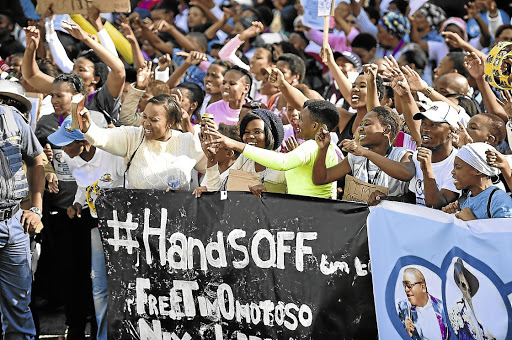 The writer argues that without independent thinking and good education black people will fall victim of charlatans, and may unwittingly support dubious and crooked politicians . / Eugene Coetzee

He is affectionately called Prophet Bazooka, the head priest of Kingdom Prayers Ministries, a charismatic church in Soweto.

Prophet Bazooka was recently released on bail, having been arrested for allegedly raping three under-age girls - members of his church.

When he was released, members of his church organised a big welcome-back event, literally rolling out the red carpet.

Such a grotesquery is not new. Pastor Tim Omotoso, another alleged rapist "man of God" who is currently in jail, was also flanked excitedly by his supporters.

Not long ago, we witnessed the bizarre case of Mancoba Seven Angels Ministries Church in the Eastern Cape.

Because religion is by nature transcendental, it is easy to concoct an irrational explanation for why people in Soweto roll out the red carpet for a sex pest who is accused of raping young girls.

The problem, though, is bigger than that religion. The phenomenon of black people supporting alleged criminals goes beyond the church.

We have seen poor people in KwaZulu-Natal show support to a king who pockets lots of money from leasing out land that supposedly belongs to "the people".

In addition to an annual budget of R60-million given to the Zulu king by the South African state, the king collects rentals amounting to more that R90-million per annum. The poor people who support him get nothing.

The alleged victims of Nigerian pastor Timothy Omotoso have warned people not to fall prey to “fake pastors”.
News
3 years ago

In the same province, we have also witnessed residents of Nkandla defending a dodgy politician who used state funds to build a Solomonic palace for himself.

Currently, there is a group of black anarchists making a lot of noise in defence of a handsome young man whose expensive car rammed into a taxi, killing two poor black people.

The anarchists say nothing about the poor black people who died; their "hands-off" campaign centres around the affluent scion of a former president.

Why do we black people defend criminals who have wronged us? We do so because of two things: ignorance and groupthink.

Gauteng is the place where the majority of educated black people are found. When a child dies in a pit latrine in the Eastern Cape, the most vocal black people to criticise the state are always in Gauteng.

When there is a textbook scandal in Limpopo, it takes an NGO in Gauteng to fight for the rights of the children of Limpopo.

When people are killed in Marikana, it is the black middle class in Gauteng who make noise about such killings.

The people who welcomed Prophet Bazooka from jail come from the most uneducated sections of Gauteng's population.

It is the nature of an educated mind to ask questions. If we black people want to make social progress as a group, we must ensure that more and more of our children go to school.

The second problem is groupthink. It is not easy for a fool to wake up one morning and present himself as a spokesperson for white people. Among us black people, clowns mushroom everyday claiming to speak on our behalf.

The Guptas looted our money while claiming to advance radical economic transformation for black people. Today they float comfortably in fire pools in Dubai while we battle to fix Eskom and other state-owned companies.

Unless and until we black people tell each other the truth, we will continue to be abused. Let us declare ignorance and groupthink our enemy number one.