Witches on broomsticks working overtime at this year's World Cup 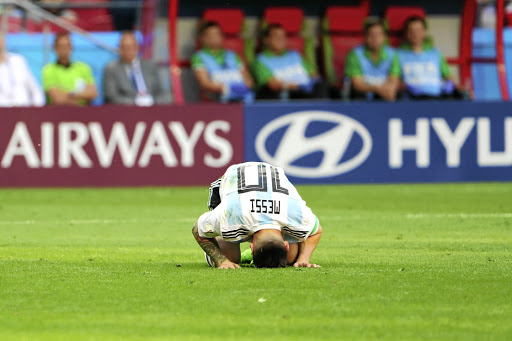 Lionel Messi of Argentina proved far from messianic for his side as he was unable to lead them beyond the round of 16 at the Fifa World Cup in Russia. /The Asahi Shimbun via Getty Images

With 10 days to go before the final game in this year's World Cup, the nail-biting countdown is on. Judging by the recent surprises and upsets in Russia, even the most casual follower of football is in for some entertainment.

I've been laughing myself silly every time TV commentator Zama Masondo, inspired by the surprises, makes his deadpan but highly humorous remarks about old women seen flying around on their witches' broomsticks in the vicinity of the stadium - "hhayi, namhlanje ogogo bandiza ngemishanelo; akulalwa."

You can't blame Masondo for resorting to talk about witchcraft being central to what has been happening in Russia over the past 22 days. The upsets and surprises have been completely out of this world, very Harry Potteresque, if you ask me.

For a start, even some of the world's top football pundits could not have foreseen that the historically entrenched footballing nations such as Argentina, Germany, Spain and Portugal would not reach the quarterfinals. In fact, early in the contest, many analysts were of the opinion that either Germany or Spain could be the final victors.

Who would have thought that Japan - of all sides! - had what it takes to change the tenor of the game?

Belgium, tried and tested in the beautiful game, wriggled and struggled at the hands of (rather at the feet of) Japan - to escape with a breathtaking 3-2 win over the minnows.

And who can forget Wednesday's tiebreaker between England and Colombia, which ended in a 1-1 draw (England triumphed 4-3 after a penalty shootout).

As we all know by now, the most dramatic turning point for this tournament happened last weekend when two of the current generation's most revered sporting icons - Portugal's Cristiano Ronaldo and Argentina's Lionel Messi - were kicked out with their respective, utterly shocked and embarrassed sides.

Could the World Cup continue without Messi and Ronaldo? Well, to steal an adage from the showbiz industry, the show had to go on.

It seemed Masondo's broomstick-borne women were working overtime. I can imagine the fights that would have ensued all over the world at both informal and formal betting agencies.

Speaking from experience, I want to hazard a guess that some people were seriously injured or even killed as is the norm during the World Cup when betting stakes get raised so high that some people even throw their houses and their wives into the bargain.

This is especially true of South America and, of course, many parts of this continent where football is not just a religion, but also a way of life. If you take a "god" such as Messi or Ronaldo out of the running, what do the worshippers have to live for?

But the silver lining to this dark cloud is that two new icons have just emerged on the horizon - Uruguayan Edinson Cavani and French teenager Kylian Mbappe.

Their respective double strikes in their teams' last games were simply exquisite, making Mbappe and Cavani players to be watched closely as the tournament hurtles towards its climax.

The delicious irony is that Cavani and Mbappe are teammates back home in France, where they ply their trade at Paris St Germain.

With Messi and Ronaldo possibly back home and having a fight with their local inyanga over what happened in Russia, what has sustained the excitement of the tournament is that many of the games have produced high-scoring duels, super-duper action and suspense to rival Game of Thrones.

And there's still more sensational - and unpredictable - action in store.